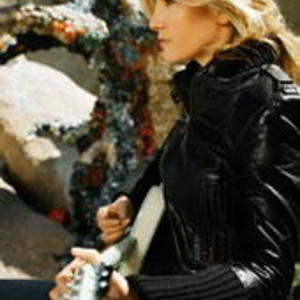 An Up-and-coming Brit that now lives in the deserts of California. The desert is where she received her inspiration for most of her album "Beautiful To Be Alive"(2005) and she is trying to become known...She is also in the early stages of writing her material for her second album, and hopes that her hard work will pay off soon.Her beautiful voice rings wonderfully with her peace-oriented lyrics, and her guitar resounding in the air, which is an awesome comination.. BIOGRAPHY Zo? Scott

Born and raised in London, Zoe's musical journey began on the mountains of Spain - where she sat for five months in an isolated mountain house listening to the song-writers of the 1960's. Moved by the purity and passion of the music and lyrics, the poetess and film student knew she needed to move to California to fulfill her destiny and make the music she was born to create.

Soon after she arrived in Los Angeles, Zoe headed to the Mojave desert -where she lived in a cave for two months on a "vision quest" to craft the lyrics for her first album. Back in Los Angeles she lived for a brief period in a van at the bottom of Laurel Canyon, then began cutting demos.

Zoe is a unique artist who has lived and performed all over the world, including Rome, London, New York, Spain, Los Angeles and India. She is a real artist in the true sense of the word, who prefers to look at the world through spiritual eyes. She writes from a sense of joy, beauty and hope -and she credits this purity of emotion and creativity to her parents,painters in London.

The desert, the native Indian way and her own journey of the soul are the muses of her work. She is an original. And no doubt someday another young songwriter will be sitting on a mountain in a remote part of the world, listening to Zoe's music and will be inspired to follow her path.

Beautiful to be Alive