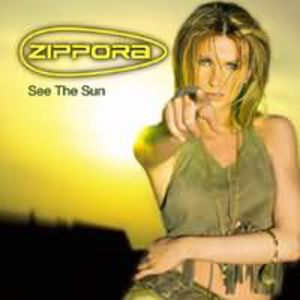 Zippora is not just the name of the group but also the name of the singer? Zippora De Brauwer. Thus her name is not a stage name but it is Hebrew and actually means 'singing bird', how appropriate. Zippora was born on July 28th 1977 in Ghent, but currently lives in Antwerp. She loves ballet, fitness, dancing, travelling and is interested in everything related to spirituality. She took to the stage at a very young age as a play-back artist: she loved to perform as Madonna and Kate Bush. Because she loved to dance, she started dance training and decided to study music/dance in highschool.

After finishing school, she was noticed by Patrick De Coninck who asked her to join his dance team The Groovies. As such, Zippora slowly came into contact with more and more showbizz people and she started to do a lot of work as a backing vocalist and a dancer in the hottest clubs such as Zillion, Caf? d'Anvers and Pacha (Ibiza).

After an audition with Byte Records she was asked to sing on a track by The Oh! However, the record company had bigger plans for her and a track was made with the help of Eddy Weyns and Pieter-Jan Verachtert (known from the D-Devils): 4 Ever U. However the big breakthrough came in December 2000 with the second single produced by Eddy Weyns and DJ Philip Meers: Lotus Eater. This track is simply a superb melodic trance song and is currently regarded as a real Belgian Dance Classic. Lotus Eater went straight to number 1 in the official Belgian Ultratop dance charts and also crossed over to the mainstream singles chart where it reached the number 15 position (without a video to support it!) . It stayed on the mainstream singles chart for no less than 13 weeks.

Follow-up single What About you (also by the hand of Eddy and Philip) was released mid 2001 and only briefly entered the mainstream singles chart, making it only to number 49 . However, the next single See the sun, released in April 2002, did a lot better (check out our See the sun review !). Supported by a cool video, the single reached number 1 in the dance charts again and number 18 in the singles chart (charting for 8 weeks) and was a huge hit in clubs, on dance radio stations and in various dance charts.

After this single, it became very quiet regarding Zippora until she signed with Serge Ramaekers and released 2 singles under the name JAM (Just Be Yourself, released in June 2006 and Keep On Movin', released in October 2006). However, neither single reached the same success as Zippora's previous hits.

Zippora did receive a lot of credit as a dance artist and was included on every major Belgian Dance Classics compilation CD released in recent years. In 2008, the news reached us that Zippora returned to the studio and in March 2009, she announced on her website that she is working on new material which will hopefully be released (under the Zippora name!) mid 2009. We can't wait to hear it!