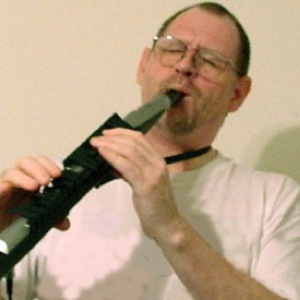 Music possesses the capacity for awakening a deeper part of ourselves which lies within. Those driven to find this bountiful experience open their eyes, ears, and hearts, seeking to find themselves and this golden thread of truth within. From this, they are compelled into expression. One of these rare but welcomed expressionists is writer, painter, musician, teacher and producer Richard J. Roberts, following what he has termed Tao of Zero Ohms (literally: way of no resistance).

Zero Ohms aptly describes Richard's range of instrumentation, with woodwinds from around the world and electronics in a versatile palette of sonic colors. His sound is at once ancient and contemporary.

During the ?70s, Richard began his ongoing research into ethnomusicology and the psycho-spiritual effects of music. He attended master's class with Jean-Pierre Rampal and has performed on stage with The Chieftains, Sarah McLachlan, and opened for Robert Rich. By the ?80s, extensive experimentation led him to the musical styles now labeled as New Age and Ambient.

Richard taught himself to play wind-controlled synthesizer, guitar, and over fifty various flutes and other woodwinds, in an embrace of styles from around the globe and beyond. The mid-?90s saw the release of five new age projects, Winds Over The World, and Gaia (Metamusic); Whale Chants, and Dolphin Songs (Tranquil/Direct); and Trans Spheres (ZOP).

While successful, these releases failed to do more than hint at the extensive ambient compositions Richard had created and performed in coffeehouses throughout Tennessee. Encouraged by friends in the industry, Richard followed his heart into the ambient realm exclusively. The result was four critically-acclaimed ambient Zero Ohms releases: The Glass Bead Game (1999 ZOP), Atma-Spheric Surfaces (2000 ZOP), SUPREME*INFINITE*ESSENCE (2000 ZOP), and produced Innerstellar (2000 ZOP), a CD of harmonic overtone singing by his friend Gordon Rhyne. Collaboration with fellow Space For Music artist Brannan Lane produced the best-selling Soundfall to the Infinite (2002 SFM) and Immense Distance (2003 SFM). These were followed by SPATIAL GLACIAL NEBULOUS (2004 SFM) and a collaboration with northern California synthesist and sound designer Craig Padilla entitled PATH OF LEAST RESISTANCE (2005 Lotuspike).

Unafraid Of The Impending Silence