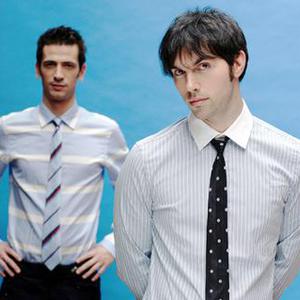 Zero Assoluto is an Italian duo active since 1999 with their debut single "Ultimo Capodanno". Friends since the High School years Matteo Maffucci and Thomas De Gasperi made their big hit with Mezz'ora in the Summer of 2004. In 2006 they participated to Festival della Canzone Italiana - Sanremo with Svegliarsi La Mattina which was number 1 for a lot of months. This summer they released Sei parte di me, another hit.

In the winter of 2006/2007 Zero Assoluto worked with Nelly Furtado on the italian version of her lastest single "All Good Things", which was a special duet included on the re-edition of Nelly's album "Loose". After a year since last Sanremo, they partecipated again at the 57th edition of the festival, with the song Appena Prima Di Partire . At the time of writing, winner has not been announced and Zero Assoluto have great chances to win.