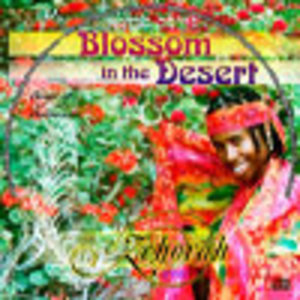 ?Blossom in the Desert? by Zehorah is the latest installment of Divine sound emanating from Dimona, Israel, an elevated expression of the new and exciting musical genre ?Songs of Deliverance?. These sounds herald the good news of peace, tranquility and harmony ? the ?New Jerusalem consciousness? ? in the here and now, manifest in the Kingdom of Heaven on earth. The mighty message of redemptive truth found in Zehorah's ?Songs of Deliverance? will assure you that true salvation and deliverance are absolutely attainable and totally real.

A member of the African Hebrew Israelites of Jerusalem, Zehorah resides in Dimona, Israel, in ?The Village of Peace.? Known for its achievements in communal living and self sufficiency, they are arguably considered the world's most progressive and health conscious community. Forty years after daring to chart a course contrary to contemporary trends and being forged in the furnace of adversity, they have been called ?the miracle in the desert? and ?an island of sanity?. As adherents to the visionary teachings and example of spiritual leader Ben Ammi, they are sought after globally as advisors in health and nutrition, agriculture, education and community development. Since music is an inherent reflection and expression of the artist's mind, environment and experience, it is such that uniquely shapes and colors Zehorah's music: she sings only of that which she knows.

While an obvious metaphor for Zehorah's budding artistry, ?Blossom in the Desert? also refers to the prophetic regeneration of the Northeast African landscape of the Judean Desert, where she and other community members have forged a lifestyle that is now in full bloom. Indeed, this blossom has many faceted petals. The CD is graced with the full range of talent from the RKP label, with appearances from numerous community artists, including members of the famed ?Soul Messengers?. As Jerusalem's location in the center of the Fertile Crescent meant that it has always been a cultural crossroads since ancient days, an eclectic range of ethnic influences and nuances are featured. Multi-talented herself, Zehorah plays keyboards, percussion and even cello, contributing her personal special touch to the CD. (As a classically-trained virtuoso, she was a featured vocal soloist in Spanish opera performed with the Jerusalem Symphony Orchestra.)

But on this project, there's no mistaking her familiar ?soul sistah? roots! Zehorah opens the album with a spoken prologue on rhythm; her authoritative vocal projection, yet soothing diction effectively combine to convey the message of how African-Edenic people lost the ?Holy? ? ?as in righteous, not religious? says Zehorah ? element of rhythm leading to a degenerative state in society today. From there, the listener joins her on a melodious and rhythmic journey of self-discovery and realized purpose. Weaving a seamless thread like a theatrical work, the album's seven scenes convey its message of promise, praise, relationship and ultimate reconciliation.

Blossom In The Desert