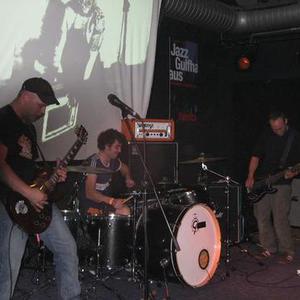 There have been at least eight artists that have used this name 1. A pop rock band from Christchurch, New Zealand 2. A rock band from San Francisco, California 3. An alias of French synth pioneer Bernard Szajner. 4. The moniker for an experimental, ambient project from Travis Nobles. 5. A thrashcore, punk band from Portugal with members now in My Rules and The Youths. 6. A hard rock, punk rock band Bristol area. 7. A dynamic jazz, fusion band from Colorado.

8. A young German band, that exists since Dec 2005 and is based in Bremen. They play psychedelic rockmusic combined with post-rock and noise elements. Official website and MySpace page.

1. Zed was a pop rock band from Christchurch, New Zealand formed in 1998. Fronted by lead singer Nathan King, their debut album Silencer was released in 2000, entered at number one on the New Zealand Album Charts and quickly achieved triple platinum status and featured six hit singles. Their second studio album, This Little Empire, was released in 2003 and also achieved critical and commercial success. The band split in 2005 with King founding a successful solo career

2. Great Rock and Roll doesn't just happen. It's made. With sweat, swagger and the swilling of alcohol. And Zed makes rock the way it should be made. Loud guitars, a dose of whiskey and a middle finger.

San Francisco Bay Area's Zed takes it cues from the greats like Zeppelin, Sabbath and AC/DC, and mixes them with their other musical influences such as Clutch, Rage Against the Machine and Queens of the Stone Age. With this mixture, Zed crafts a sound that is new, yet familiar and are bringing back the guts, the grit and the balls to Rock. And they won't stop until they succeed. At least in getting drunk and having a good time.

In April 2010, Zed released their first full-length album, "The Invitation", which they had been brewing in the studio for over a year. A hard driving, aggressive sound with lyrical themes covering the spectrum between the socio-political to personal issues, almost anyone in today's society can relate to the what the songs express. And this is what makes the album as much an impact to the heart and head as it is to the gut. So give it a listen for yourself and accept Zed's invitation to rock.

There have been other artists named Zed in the past, and below you'll find a list.