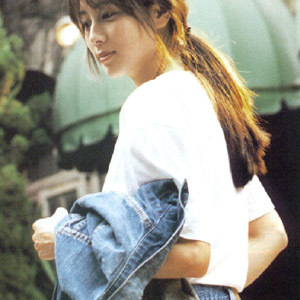 ZARD (a.k.a. Izumi Sakai (????, born Kamachi Sachiko ????, 6 February 1967 ? 27 May 2007) was a female Japanese popular musician. Originally a group of 5 members, with lead vocalist Izumi Sakai (aka Sachiko Kamachi) as group leader. She was part of the record label B-Gram Records, Inc. Zard made their debut in February 10, 1991 with a single Good-bye My Loneliness. By their third album, it appears that the only member left in ZARD was Izumi Sakai, and from that point on, she had been the only member in that group.

Sakai was also a very prolific songwriter. She had written all her own lyrics, and had released several books of poetry as well. She had also written songs for other artists, most notably, for JPOP groups Field of View, WANDS and DEEN. She also wrote the lyrics for and participated in the collaboration for the single "Hateshinai Yumewo" featuring JPOP groups ZARD, REV & WANDS. The single also featured famed Japanese baseball hero Shigeo Nagashima. Some of her singles have been used in Anime, such as Dragon Ball GT and Detective Conan. Sometimes, she would cover songs she's written for other artists like Field of View's "DAN DAN Kokoro Hikareteku" or Teresa Teng's "Anata to tomo ni ikite yuku".

ZARD was also known for being mysterious. This is partially because her record label does not release too much personal information on their artists, and also because she did not make that many personal appearances. She had rarely appeared on any live TV music programs (eg. Asahi TV's Music Station, Fuji TV's Hey Hey Hey Music Champ), which the main public relations tool for the record industry in Japan, since 1993 or do any public appearances. Her first concert was in 1999, which was held on a cruise ship for a mere 600 people in her fan club (300 entries x2 among 2 million concert ticket requests). Her first real concert tour, "what a beautiful moment tour", was held in 2004, 13 years after her debut. Almost every single concert was sold out at the time. The tour ended up having 10 concerts spanning 4 months from March to July 2004, with a final concert held in the famed Budokan.

She passed away on May 27, 2007 in Keio University Hospital. She was put in the hospital in June 2006 after discovering she had cervical cancer. In April 2007, the cancer had moved to her lungs, delaying her stay in the hospital. According to the hospital, she takes daily walks every morning, during her walk on May 26, 2007, she accidentally fell from the stairs and was discovered at around 5 a.m. She was sent to the emergency room, but unfortunately still left. She had planned to release a new album in the fall, as well as her first live tour in three years to show her fans that she's fighting strong against her illnesses. Her company sincerely thanks her fans for the sixteen years of support and wishes that she can live forever in the hearts of the fans. She was 40 years old.

Kimi To No Distance