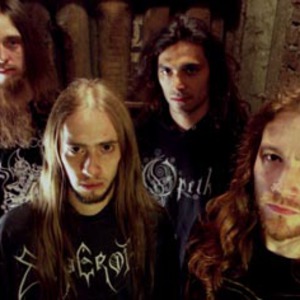 Yyrkoon, pronounced 'EAR koon' is native of France, the band was created in 1995 by four members : St?phane Souteyrand (guitar & keyboards, Aborted), Laurent Harrouart (drums), Paul Banas (vocals & guitar) and S?bastien Caron (bass guitar). They directly started to play and compose their own kind of music which is a mixture between their influences and gave us a very personal Black/Heavy metal . The main thematics of the band are occultism, horror/fantastic and personal member's philosophy.

One year later (1996), Yyrkoon decided to record the first demo tape in autoproduction : "Oath, Obscure, Occult...", it contains 5 songs of their personal metal. They added different sounds textures to their style like a female voice, violin and flute. This tape allowed the band to be welcome in the underground, to find date to play live with other bands and to trade demos with their french neighbourings.

The demo was sent to different french labels and one was interested to do something with Yyrkoon : Velvet Music International (Blut aus Nord,Wallachia, Mundanus Imperium, ...) purposed to the band a deal for their first full lenght album. The band accepted the term and prepared the composition of their first album. The motivation at this time seems to be different for each members and a little conflict leads the line-up to change. This is done during the recording of this album, Paul Banas (the singer) & S?bastien Caron (bass guitar) decided to leave the band and new members joined Yyrkoon : J?r?me Barouin (session guitar) & Kristofer Laurent (bass guitar). St?phane Souteyrand decided to sing and thought that it would be preferable to find a keyboard player for shows. St?phane asked Jeff Gautier, an old friend, to join them to ensure Yyrkoon's keyboard parts for the shows and the studios. After this change of line-up, the band was ready to re cord the first album "Oniric Transition" in 1998 at the Walnut Groove studio in Amiens (France). The style is the same as the demo but is more mature and technic. St?phane introduced clean vocals on chorus what personalises more the music. Magazines usually reviewed this album as Dark Metal because of the diverse influences and songs variety ; heavy solos, atmospheric parts, agressive death metal riffs and raw black metal cadences !! the whole well digested through this album. With this, Yyrkoon multiplied contacts and shows. Various songs on different CD compilations (Encyclopedia Pestilencia -France-, Asgaarden -Norge-...).

One year passed, and no news from VMI... Yyrkoon fastly understood that they would have to find a new deal with another label to work with on their second album. During this time, J?r?me Barouin (guitar session on the first album) left the band to consacrate himself to his project.

In 2000, Yyrkoon recorded a new 2 titles promo-CD called "Forgotten Past" in the veins of "Oniric Transition" to contact labels. This is recorded in the same studio in Amiens by Axel Wursthorn (member of Carnival in Coal). Thematics stay unchanged, and St?phane (vocals & guitar) composes the whole of the music and lyrics.

The band stayed around 7/8 months without second guitar for their shows. After difficult search, they met Fran?ois Falempin (guitarist) and tried him for a new line-up. But the line-up's problems were not finished... Yyrkoon prefered to fire Kristofer Laurent (bass guitar) after a little altercation concerning motivation and principaly music orientation of the band. ... a new departure, a new search. Fortunately, the quest was not long as the time spent to find the second guitarist and the band discovered Victo Villchez (Phazm). The contact with him was excellent at the first meeting and Victo (bass guitar) joined the band onto the minute. That brought a fresh motivation to the band. From the beginning, Yyrkoon played with various French bands, and at this period, shows became more interesting, the band shared the stage with bands like Septic Flesh, Natron, Avulsed, Misanthrope, Aborted, Gojira, Scarve, Mercyless, ...

After a show with the new line-up in Paris in 2001, Yyrkoon met St?phane Brulez (Anvil Prod's label manager) to discuss about a possible two albums deal. This guy showed his intersest for the band's music and spoke about a future collaboration. Yyrkoon signed up on this label, Anvil Prod, which is very young and Yyrkoon is in fact the first band produced by it.

Anvil Prod allowed Yyrkoon to record their second album at Emma Studios in Paris in the end of 2001. Musically, the compositions are a bit different than others recordings. In fact the whole is more axed on thrashy/heavy old school influences of the band's members. Keyboards are not so present and are really discreet in the songs. That gave birth to "Dying Sun" the second full lenght album in april 2002. Reviews are really good in magazines, some people who knew the band with the precedent album were surprised in good or bad. Some new people discover Yyrkoon with this album too. One thing is sure, the music on "Dying Sun" is still very personnal and sounds always as a true Yyrkoon's way. Anvil Prod found foreign distributions for this release (Japan, Russia...), this brings to the band a new fame.

2003, Yyrkoon works on new songs again, and speaks about the third official album recording. Band's evolution leads it-self to make choice; In a hand, Fran?ois's guitar game doesn't satisfy totaly others members, and in the other hand, St?phane (vocals & guitar) wants to come back to a new raw formula metal, without keyboards... discussion... discussion again... Finally, Fran?ois (guitar) left the band, Jeff (keyboards) dropped his keyboard to grab the second guitar. New songs are more brutal and cold than before. This is a kind of mix between a insane death metal and a harmful thrash metal...

Everything is ok, and Yyrkoon chose to record in Denmark at Jacob Hansen studios (Invocator, Ancient, Aborted, Illdisposed, ...). But studio rhymes with problem. Actually, Laurent Harrouart (drums) at this time, knows personnal problems and lost to many motivation to commit himself for studio. The studio is reserved yet, so the band has to find a solution. Dirk Verbeuren (Scarve & Soilwork's drummer) is contacted by St?phane to ensure session studio for Yyrkoon and he accepted. The band left for denmark in november 2003 and stayed 3 weeks there to record their third full lenght album named "Occult Medicine". The production is really good and all members are very satisfied by the final result. As they came back to France, they sent some copies of "Occult Medicine" to several labels. During their trip in Denmark, they spoke about Anvil Prod's job, and what this label really brought to them. After several point of view and discussions, they were ok on the decision to find something better for Yyrkoon and riped off the deal with Anvil Prod.

After two weeks, Yyrkoon received some positive answers from French labels, and finally, among several propositions, they decides to work with Osmose Productions and signs a two deal albums (including the third one "Occult Medicine"). The band, at this day is ultra motivated by the future collaboration with Osmose Productions and waits the official out date of this third album; 11th october 2004. Laurent Harrouart (drums), after personnal complications left the band and Yyrkoon plays now with sessions drummers (for shows) before to choose the new integrated one.