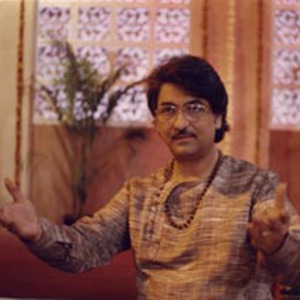 Born to Kunjbihari and Mayuriben Desai, Ashit inherited music from his parents . After a degree in Commerce , Baroda-born Ashit took a Diploma in vocal music from M.S. University and left for Mumbai to realize his dreams. Ashit rose to the aspirations of his parents and in no time carved a niche for himself in the world of music. At 18, he won the All India Radio's Best Singer Award in 1969. Thereafter, awards, accolades and distinctions followed him. He received the Gujarat State Award in 1976 & 1989.

Like a spring of water bursting forth from the earth, the music within Ashit is a force eager to be released, and it is a force that cannot be confined to just one form or expression. Ashit's repertoire flows both wide and deep. In his rich, baritone voice he sings for both audiences as well as recordings; he composes & arranges its performance. Well known for his soulful light classical renderings, he is equally sought after for his creative faculty which covers an astoundingly wide range; from composing scores for dramas, dance ballets, TV serials & films to innovate effervescent jingles. "Versatile" is the word to sum up Ashit's creative endeavor & genius. Musical talent has come to Ashit as a parental inheritance. After a degree in Commerce, Baroda-born Ashit took a Diploma in vocal music from M.S. University, & came down to Bombay with single minded determination to carve a niche for himself in the world of music. On this firm foundation he has raised a large & intricate edifice of musical accomplishment.

Ashit has been honoured time again by the music world. At 18, he won the All India Radio's Best Singer Award in 1969. Since then, accolades, distinction & awards have come his way in profusion, including the Gujarat state Award in 1976 & 1989. He has earned unstinted acclaim for his music direction in the monumental Doordarshan serial "Chanakya".

Ashit's association with Sitar Maestro Pandit Ravi Shankar is possibly the most significant phase of his career. The maestro enlisted Ashit in composing music for the Asiad, & placed him in charge of overall coordination of cultural events. This brought him the conferment of the coveted Asiad Jyoti Medal by the President of India. Ashit also sang devotional songs for Attenborough's film "Gandhi". In 1988, he conducted Panditji's orchestral compositions at the closing ceremony of the Festival of India in Moscow. As the maestro's assistant, orchestra conductor & singer, he toured the U.K. & India in 1989 with Panditji's ballet, "Ghanashyam".

These & other honours sit lightly on Ashit Desai's shoulders. In his restless quest for excellence, Ashit has his moorings firmly rooted in tradition; but he revels in experimenting with creative variations within the broad framework of the poetic mood which is being evoked. As a composer, his style reveals distinct flashes of individuality & is also replete with emotion. He tackles difficult themes with effortless ease, lending a masterly touch to his compositions. Over the last two & a half decades, Ashit has crafted a rich & varied body of work..... yet his musical talent flows on unabated.So much done, so much yet to do!