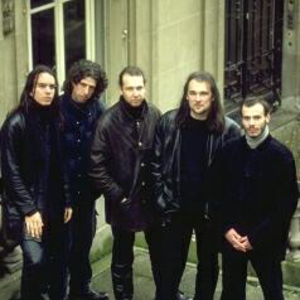 During 1995, the band rehearses regularly and experiences some changes in the line-up (female vocals by Sandrine B., additional guitar by Sylvain O. then by S?bastien R.). Musically, the band is inspired by Heavy, Doom, Death, Gothic, Black and classical music.

In July 1995, the band disagrees on the musical orientation. Nicolas and David decide to carry on in a doom spirit, different from the original. R?v?rend Michel C. ? la basse offers to play bass and the band works with a drum machine. Jean-Marc joins the band and creates keyboards and drum-machine programming of the first line-up (Gothic Visions, Dark Retaliations, Your Shapeless Beauty) and starts playing on second guitar

In September 1995, Nicolas and Jean-Marc record ?Rehearsal 1995' with the help of S?bastien (solo). This recording motivates the band into entering a recording studio to create a real demo at the end of the year. Before entering the studio, the band meets Michel Canavaggia (solo) to finalize the line-up (vocals, bass, keyboards / drum machine, 3 guitars)

In December 1995, the night before the band would enter the studio (Thursday Dec. 1st), YSB plays its first gig at the Irish Cultural Center of Montpellier with the band Kalisia. On Friday Dec. 22nd, Your Shapeless Beauty enters the recording studio Nerves (Salon de Provence) where Jean-Michel Bouillot invites them for their first real demo (8-digital track recording, seven songs in three days).

1996 starts toughly for the band with David leaving YSB. Nevertheless, it doesn't prevent the band from carrying on:
Mar. 23rd in Miramas with Filthy Charity, Eternal Winter Season and Darken,
Apr. 10th in Montpellier with AD-Nutum,
Jun. 21st at the Th??tre Antique of Arles,
Sept. 5th at the L'?-cot? in Marseille with Filthy Charity and Eternal Winter Season,
Dec. 12th in Lyon with Kalisia, The Blood Divine and My Dying Bride.

Adipoc?re Rcds re-releases the ?Your Shapeless Beauty' demo in limited CD (1500 copies). Reviews appear in fanzines and magazines that like the production and the compositions, which allows the band to have an excellent promotional tool. In September, Your Shapeless Beauty meets Jean-Marc N. (drummer). No more drum-machine! The band spends several months adapting its repertoire and its technique.

In 1998, Shapeless keeps going slowly but surely. With a growing repertoire, a stable line-up for 2 years, and in spite of rehearsing difficulties, Shapeless enters the Studio Nerves again, this time to record the first album ?Sycamore Grove'. Recorded in 11 days between May and June 1998, the CD will be released (March 1999) on a limited version digipack (3000 copies). The musical press interviews the band abd reviews the album with a lot of enthusiasm.

Some gigs in 1998 :
Feb. 17th at Luyne with Winds of Sirius,
Apr. 30th at the Cargo de Nuit in Arles,
May 12th at the Pezner in Lyon with Evol, Winds of Sirius et Hhiminbjorg,
Jun. 13th at St. R?mis with Cort?ge,
Jul. 4th at the Nuclear festival avec Krabathor in St. Paul les 3 Chateaux,
Dec.5th at the Zinc with Damnation AD in Montpellier.

Some gigs in 1999 :
Feb. 27th at the Gibus in Paris with Forest of souls,
May 8th at the Croque'Mort in Perpignan,

Shapeless plays its last gig with J-Marc N. at the Croque'Mort in Perpignan. While looking for a new drummer, Shapeless then meets J?r?me Lavail . The band keeps rehearsing extensively and after several months, Shapeless gets the opportunity to open for the ...And Oceans, Bloodthorn and Aggressor tour at the Rockstore in Montpellier.

Nov. 7th at the Rockstore in Montpellier,
Nov. 20th at the Poste ? Gall?ne in Marseille with Atropos

In 2000, the members are all over the country for professional reasons, which prevents Shapeless from rehearsing and makes it difficult to do live shows. In spite of all that, YSB records a concert on May 6th at Salon de Provence (with the help of Nerve Prod and Adipoc?re Rcds), of which several songs will be used to feature on the the mini-CD ?terrorisme Spirituel' (available in January 2001), including 3 studio tracks: one previously unreleased song ?Indulgence Aveugle', and new versions of ?Le Chant Des Bannis' and ?The Forthcoming Answer' (also recorded live at Salon De Provence between Sept 23rd to 25th 2000).

Year 2001 starts really well with a headlining gig at the ?new metal' Festival in Compi?gne (France) on January 13th, and the release of Terrorisme Spirituel.