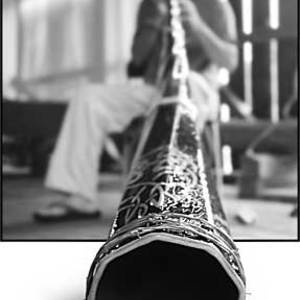 Ash Dargan, an Australian indigenous recording artist world renowned for his mastery on the Didgeridoo has been pushing the boundaries of contemporary world music for the last eight years. His distinct blend of Australian indigenous and contemporary world music captures the essence of one of the oldest cultures on earth and with it transcends the boundaries of time. His music has been described as the soul of the Australian Dreamtime landscape with a timeless quality reflecting a deep connection and reverence for the spiritual wisdom of his ancestry.

A member of the Larrakia Nation, the traditional land owners of Darwin in the Northern Territory of Australia, Ash is an ambassador of his culture through his music, storytelling and live performances. Ash was classically trained in music from the age of eight on trumpet and came back to his cultural roots at the age of twenty two. His grandmother and great uncle, both traditional elders of the Larrakia people were instrumental in his musical adoption of the Didgeridoo and its deeper cultural significance. Through them he came to know of the Didgeridoo's unlimited potential for the expression of rhythm and its ability to represent the power of the natural and spiritual worlds. The vocal harmonies used in traditional corroboree?s (ceremonies) and the natural voice of Australia's native song birds have also had a great influence on his musical compositions.

Didgeridoo Made Easy A Beginner's Guide