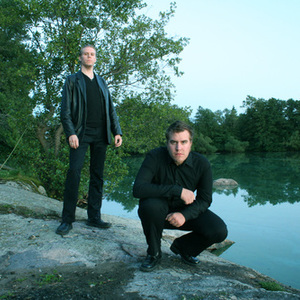 1) Yggdrasil is a Swedish folk metal band. At the turn of the year 2000-2001 Magnus Wohlfart and Gustaf Hagel decided to create a musical project combining the dark and mysterious atmosphere of traditional Scandinavian folk music with the powerful force of metal. And so YGGDRASIL was brought to life. After having released two demos, YGGDRASIL recorded the debut album ?Kv?llningsvindar ?-ver Nordr?nt Land? (?Evening Winds Over Northern Lands?) in 2005, which was released via German record label Det Germanske Folket in late 2007.

At the turn of the year 2000-2001 Magnus Wohlfart and Gustaf Hagel decided to create a musical project combining the dark and mysterious atmosphere of traditional Scandinavian folk music with the powerful force of metal. And so YGGDRASIL was brought to life.

In 2008 the follow-up album, ?Vederg?llning? (?Vengeance?), was recorded and subsequently released in the summer of 2009, also by Det Germanske Folket. This year saw YGGDRASIL conquering the stage at Germany's Ragnar?k Festival, where thousands of fans gave YGGDRASIL two horns up! The year closed with both YGGDRASIL albums being released in digital format for the first time through Swedish label Grand Master Music.

Following a split with the record label Det Germanske Folket, YGGDRASIL is currently focusing on the completion of a new album to be recorded in 2010. Interested labels are welcome to approach.


2) Yggdrasil is a music project consisting of Mathias Eriksson and Andreas Lingbrand. Both have been making music for a couple of years (mostly electronic). In the summer 2004 Yggdrasil was born. At first lot of psychedelic chill-out music was produced as result, but later they started mixing it with Scandinavian folk music. Working in two studios, with professional folk musicians of Yggdrasil are now developing a new sound within the psychedelic music scene. Using computers, synthesizers, guitars, fiddle, keyed fiddle, percussion, jaw?s harps and vocals, some mysterious tales from the north are being told. Mathias Eriksson has produced music as MEEO with an album released on Demon Tea recordings in 2007 as well as work with Dark Nebula on his well known album Weird Sound Generator released on Digital Psionics in 2008.

The info copied from the publisher's site:
http://www.digitalpsionics.com/artists/Yggdrasil/

Yggdrasil is above and beyond the flip side of psychedelic electronic chilled out beats. It's like pancakes hitting your ears and maple syrup running down your face. A spongey citadel of squelchy bliss that can only be experienced while listening to the Yggdrasil sound. A Swedish duo masterpiece of world fusion beats baked with synthetic layers and acoustic deliverance.


3) Yggdrasil is also another world music group from Melbourne, Australia. Yggdrasil (ig-dra-sil) shape a compelling array of richly textured instrumental compositions full of depth, intensity and character. Their pieces are charged with odd-time rhythms, intricate melodies & dueling improvisations.
Yggdrasil have performed to audience acclaim at the Apollo Bay Music Festival in 2007 and 2008, at the Darebin Music Feast 2008 and Cygnet Folk Festival in Tasmania Jan 09. The group released a self-titled live EP in May 08 and continues to develop their own unique sound with developments for a full-length album under way.


4) Krautrock band From Munich. With violin and flutes, their only LP was recorded in the summer of 1972 but only 10 copies of the metal acetate were made. From a first-grade copy of the master tape
Yggdrasil from Munich named themselves after the world ash or yew tree of the Germanic tribes and played progressive rock of a calmer nature, with flute, violin, and English lyrics. They are hardly known, as their own LP, recorded in the Robert Meilhaus Studio, didn't get beyond the so-called metal acetate, a pre-state which can be played. In summer 1972, only 10 copies were produced by Meilton; they have never appeared in collector circles. These records could probably be sold for a four-digit amount today. The CD contains the five LP tracks plus eight instrumentals from 1970, then soundtrack to the TV series ?Sommer in Sizilien? [Summer in Sicily], as well as five demo tracks recorded in the rehearsal room. Fortunately, there was still a copy of the LP master tape. http://www.diregarden.com/god153.html

5) A black metal band from Denmark that released one demo in 1994.

6) A black metal band from France lead solely by Erik and with one demo released in 2005.

9) A gothic/doom metal band from Germany by members of German band Kraftschlag.

10) Yggdrasil is a world music group from the Faroe Islands. The group plays ethnic music from the Faroes - ballads, hymns and Inuit music with jazz influences.
http://www.myspace.com/yggdrasilsound