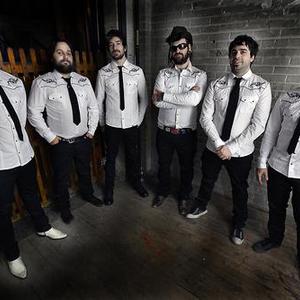 Yesterday's Ring was started in 2000 on a hot summer day on the front porch of a punk house in Memphis, TN. Fred Jacques (guitar and vocals) and Hugo Mudie (vocals) were on tour with their band, The Sainte Catherines. Fueled by whiskey and beer, they decided to start writing folk/country songs influenced by a mix of Bruce Springsteen, Johnny Cash and ?punk heroes? like Tim Armstrong of Rancid, Joe Strummer of The Clash and Shane Macgowan of The Pogues.

?We were just tired of playing loud and fast songs? Hugo says. ?We were listening to a lot of country in the van and we wanted to do something like that, but growing up in the punk scene, it came out really dirty, rough, and punk...?

The duo got back from tour and played shows around their hometown, before releasing a much-acclaimed EP on local imprint, Dare To Care Records. In 2003, they released the bilingual acoustic folk-punk Onze chansons pour faire pleurer les morts-vivants, still on Dare To Care, adding to their line-up Louis Valiquette (guitar and vocals) and Marc-Andr? Beaudet (bass and vocals) of The Sainte Catherines. After a cross-Canada tour, some East Coast US dates and some European shows, they released in 2005, El Rancho, which really established them as one of the top alt-country band to ever come out of the Province of Qu?bec. Mixing their old love of the punk-rock energy with their new dedication to the country and folk tradition, the band really founded a new sound that they were more comfortable with. Adding drums, electric guitars, bass, keyboards, harmonica, banjo, mandolin and horns, the band sounded a lot better live. ?When El Rancho came out, people started to take us more seriously. We had written all those songs on the road with Ste Cath, but we knew a bit more about the style of music we were trying to play and we were just older, I guess.? The album was rough around the edges, but altogether singalong-able and energizing, and it garnered a great deal of praise from zines, magazines, blogs, and fans alike.

The increasing attention was enough to score them gigs with similarly-minded bands like Lucero and The Real Mackenzies, and by 2008, Yesterday's Ring had played over 200 shows around Canada, the United States and Europe. They recorded the four-song EP Back From El Rancho in 2006 and continued to play dates around the hectic touring schedule of The Sainte Catherines (Fat Wreck Chords, 600 shows in 14 countries since 2000).

Now with Mathieu Guilbault (Bass, Fifth Hour Hero/Mi Amore/Rudy Caya) and Ryan Battistuzzi (Guitar, Banjo, Pedal Steel) and with featurings from well known and talented musicians like Malcolm Bauld, Mara Tremblay, B?atrice Martin of Coeur de Pirate, Keith Douglas and Chuck Robertson of Mad Caddies, they might have just wrote the best country-influenced album to ever come out of the city of Montreal. ?We really wanted to make an album that we would be proud of. We didn't limit ourselves to write country songs or folk songs, we just wrote pop songs, great songs I think, that are far away from the heavy music we make with The Sainte Catherines, but closer to what we actually listen to at home and in the van.?

Diamonds in The Ditch was produced and recorded in their hometown, by the band and features heartfelt and catchy songs that people will have problems getting out of their heads. Country, Folk, Rock, Pop, Punk and influenced by the greatest songwriters of our time like Bruce Springsteen, Tom Petty, Bob Dylan, Billy Joel, Lucinda Williams, Steve Earle, Shane Macgowan and more. ?This album is like a road trip. It's really a story about someone that leaves Montr?al to get away from drugs, alcohol and?a girl, of course. The hero drives all the way to Florida and realizes that it's all the same over there and comes back home, to find better things even though nothing has changed. He realizes that where you live doesn't bring you happiness, you bring it to yourself.?

They will tour the world with Diamonds in The Ditch and everywhere they will go, people will just wonder: ?Why haven't I heard of this band before?? People and critics used to call them one of the best side projects around. With the new record they will simply be one of the best band around.

Now joined by Mathieu and Ryan and featuring talented musicians like Malcolm Bauld, Mara Tremblay, B?atrice Martin, and Keith Douglas and Chuck Robertson of Mad Caddies, ?Diamonds in the Ditch?, their 2009 release on Suburban Home Records, is the album they've been striving to create over the past nine years. Heavy doses of country, folk, punk rock, and traces of zydeco meld with traditional rock and roll swagger to create a country-rock opera that's both eclectic and anthemic, firmly defining Yesterday's Ring's unique position in today's music scene.

Diamonds in the Ditch