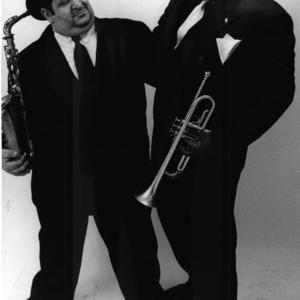 Considered by many to be the finest and busiest band to arrive on the New York Swing scene, The Yalloppin' Hounds derive their name from a running gag among the musicians of the Illinois Jacquet Big Band. One day at a French concert, Jacquet poked fun at another well-known Swing band from New York by referring to them as a bunch of "yallopping hounds", so when the founding members, all Jacquet alumnus, got together to think up a name for their new swing band, the choice was obvious. "We knew enough about each other already to hear a sound in our heads.

.and the sound was that of a bunch of barking dogs...." explains bandleader and saxophonist Joey "G-Clef" Cavaseno.

Cavaseno was trained under the strict tutelage of some of the last living masters of Jazz Music, such as Doc Cheatham, Illinois Jacquet, Panama Francis, and Arvell Shaw. He stayed in these bands for over a twelve year period, studying, performing, observing, and paying dues, so that one day, he too might lead a great band. While many of his peers scrambled to acquire record contracts before even having played professionally as a sideman for any length of time, Joey followed the great example of so many reedmen in the orchestra of his idol, Duke Ellington, and stayed as long as he could, soaking up the experience and learning the craft first-hand, in a time where such experiences were all but gone away. In all three of these bands, his talent blossomed and he was given heavy responsibilities oftentimes as a featured soloist, lead alto, straw boss, and musical co-director; often called upon to write musical arrangements. Jazz Music brought him to over thirty countries before reaching the age of thirty.

During the same time period, a revolution in music was happening all around G-Clef's New York, circa 1986-88: Hip-Hop. It was the dawning of a new age in this brazen Black artform, known as the new skool. The huge beats coming out of car systems were becoming more musical and at the same time revolutionary in tonality and timbre. G-Clef heard something in it that attracted his heart, and he followed it, humbling himself 100% to a new type of training: the unlearning of music as he had come to know it! G-Clef did the unthinkable for any accomplished jazz musician of his day, he achieved total submersion into the culture and artform that was Hip-Hop. He joined up with several rap crews in the Bronx area known as Gun Hill, where he trained and mastered all the musical elements of this ground-breaking revolution, experimenting with various drum machines, samplers, 4-track recorders, eventually rhyming as well. He sought to unite this new technology and sonority with his jazz training and eventually scored a deal on Tuff City Records in 1992 with what was beyond a doubt the first Jazz-Rap fusion group, Ghetto Philharmonic. He did not stop there, as he ventured further into the rap music game, he eventually led an aggressive cutting edge group which was, for a time, under the Wu-Tang umbrella, the Soul Kid Klik. All the while, and for a period of about twelve years, this musical Gemini led a true double life, nicknamed G-Clef in Hip-Hop, while still referred to as Joey Cavaseno in Jazz.

then it all came together.

In 1998, several members of the Illinois Jacquet band, past and present, began jamming on their own to create a smaller group. Tapes were sent out, and the Yalloppin' Hounds were born. In 1998, the new band he formed was performing at the same series at Lincoln Center as was the Jacquet band, with himself at the Lead Alto chair, and it was then that he realized the time had come to break free. Doors swung open like mad for the Hounds, as it was the height of the modern swing craze and young people were rediscovering Swing culture. Gigs were abundant, and in no time, G-Clef found himself working six shows per week, with little or no time for his straight jazz or hip-hop careers. He was now a musical pioneer in a strange new idiom: Modern Swing. G-Clef knew what his contribution had to be, and he began, for the first time, combining his talents as a rap lyricist/producer and jazz composer/arranger, writing complete songs in a style he called "ghetto swing". He said, "The term Ghetto Swing in our mind refers to the rich history of African American folk music. Whether one calls the style swing, jazz, new jack swing, funk, hip-hop or rhythm and blues, if there is a 'swinging' feel to it, it can be Ghetto Swing."

The Yalloppin Hounds have since possessed the distinction of being the first band in the world to combine the elements of traditional Swing with Hip-Hop stylings, creating a unique and excitingly fresh hybrid. The band, currently weighing in at seven pieces, sounds like a much bigger group, due to the tight section riffing by the horns, and the constant driving beat. Contrary to many early misconceptions, the Hounds are neither neo-craze jump band nor a rap crew; they are a group of musicians and vocalists of the highest caliber who swing and/or groove hard with relaxed precision. Since their first incarnation in 1998, the Hounds have grown from a vibrantly authentic swing/jazz band to producing some of the most universal original music of the new millennium.

A key factor, and perhaps the most important of all, is the wealth of original material brought forth by the Hounds. With a focus on material with decidedly less trite subject matter than one would come to expect from today's Modern Swing, Composer, Lyricist, and Arranger G-Clef chooses to portray real-life scenarios more-so than a retro tone. Strong, catchy melodies, as well as a hard-driving rhythm are the vibe, sparked by the raw abandon of the Hounds. G-Clef has penned songs that will instantly impress as sure-fire hits; In New York, and now in other places, music fans of all ages can be found regularly humming and singing the tunes! Subject matter ranges from the sexual to the spiritual, and everything in between. This groundbreaking yet palatable music has been unleashed on the mass public in the band's three CD releases: Ghetto Swing Extreme, New Yalloppin' City, and their Lincoln Center debut, Dirty, Raw & Swingin' , all available on Yalloppin Entertainment, and distributed nationally in stores by City Hall Records.