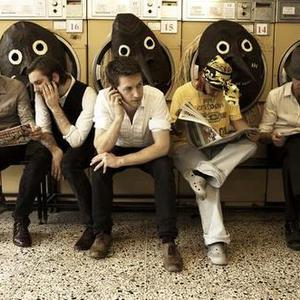 XX Teens (formerly the Xerox Teens) formed in 2004 and are 5 young men from London.They released their debut album Welcome To Goon Island in July 2008. It was produced by Sheffield's Ross Orton (M.I.A., Fat Truckers, Bromheads Jacket) and was released through Mute. Previously labelled absurd, eccentric, political, experimental, it sometimes seems people find it rather hard to get a handle on the XX Teens, yet their plan is simple.

Previously labelled absurd, eccentric, political, experimental, it sometimes seems people find it rather hard to get a handle on the XX Teens, yet their plan is simple. Born from the great British art school tradition their approach is to create the most interesting & expansive music possible with the limited tools they have available; an aesthetic that seeps into everything they do from videos to photos to extra curricular activities such as training dogs to dance. Yet such apparent frippery shouldn't disguise the fact that they are able to pen rather fine songs, as Welcome To Goon Island attests.

Previous singles such as Onkawara, Darlin&rsquo; and How To Reduce The Chances Of Being A Terror Victim have already seen them bag single of the week slots in NME, praise from the likes of Zane on Radio1, Marc riley on 6 Music, front covers of Artrocker and a slot in the NME's tracks of 2007 list. And with Welcome To Goon Island, XX teens look set to bring a bit of depth & technicolour joy into the sometime hegemonic drabness of the current musical landscape. Amen.

The band's current line-up is as follows: