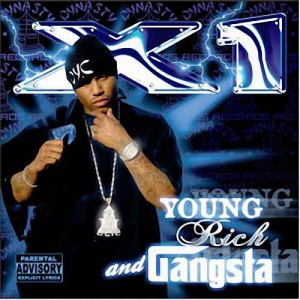 X1 (1979-2007), Born in Brooklyn ,N.Y, where a year later he moved to South Jamaica Queens, where he got his first break in the music business. He was 16 years old, selling drugs on the corners of Queens trying to get rich quick. But trouble always seemed to follow him until he realized that this wasn't the way out of the hood. Till one day on his way back from O.T. hustling' he ran into some of his peoples from his hood and formed a group called "GANGREEN" which they all used to hang out on Rockaway blvd.

and 131st. in front of Kennedy's Fried Chicken. One day, fresh off of tour ONYX came through and he met the group "GANGREEN" they immediately hit the studio, and from there it was on. They shot their first video called "I'LL MURDER YOU" which was produced by Fredro Star. They had the whole hood going crazy, they were HOT!!! But for some reason labels were interested, but not totally interested. Every record label that demo was shopped to would always ask, "Who's that one kid???" That one kid was X1. Onyx quickly recognizing this, brought X1 on board full blast with there project. He out-shined members of the group in certain areas and help them creatively. The titled album "SHUT 'EM DOWN" came out and went Gold, which was helped by some of the previous singles that had come out before the album such as a song called, "THE WORST" which was one of X1's first videos that he shot with Onyx feat. WU TANG CLAN" where he shined tremendously. His performance earned him the respect he deserved from some of the elite rappers in the game at that time. The next video he shot was called "REACT" feat. 50 CENT. A lot of people don't know X1 and 50 CENT were very close , 50 would hang out at there studio sessions hoping to get 16 bars on a record some where, but X1 respects 50 for doing his own thing and being one of the top dogs in the game today. X1 was also cool with JA RULE, he watched JA go from Cash Money Click to being one of the most successful pop artist in hip hop. After the Onyx album X1 focused on his solo career leaving the Onyx camp but still on good terms with all of the members, which he later on helped them with there solo projects. He eventually signed a deal with "MIKE TYSON REC. when at the time Blue Williams was the president of the label, soon Blue was fired and the label then was ran by Jimmy Henchman and his brother Mario which X1 had a good relationship with. A year after that the label didn't quite take off the way X1 expected, so he then went and signed a new deal with California record company "BALL'R REC. which had a roster consisting of three acts: KrazyBone, The Relatives, and X1. The label ended folded before X1 could release and album. So here he is now on Dynasty Records (based out of Las Vegas, NV.) where he is do to release his debut album Young, Rich and Gangsta in the summer of 2006. The album is filled with hood anthems (coast to coast, dangerous), club bangers (get it crackin, move that body) and seductive songs( thats why, I need a woman like you) for the ladies. Throughout the album X1 takes you on a journey from where hes been, where he is know and where hes going. The mixture of well thought out metaphors, real life experiences and hot production will make this album a true hip hop classic. Dynasty Records 702 697-8959