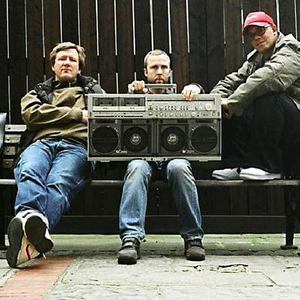 Their first studio session left them cold theyd intended to sample an old Cloud One track but that typewriter percussion noise was all that survived. Everyone else disagreed. Muzik X-Press was an instant worldwide club hit. DJs as influential as Pete Tong and New Yorks Junior Vasquez then in his Sound Factory prime loved it. Clubbers around the world declared it an instant anthem. Its follow up, the juddering, funky London X-Press with its exhortation to "raise your hands!" was just as monstrously successful, it was the daft dancefloor smash, Say What, that came next. When their records began to get, as Ashley puts it, "more oblique", the three were content to put X-Press 2 aside and move onto other projects, and the three moved effortlessly into jazzier, funkier, more downbeat arenas with their internationally respected Ballistic Brothers team-up.

In April of 2000 X-Press 2 found themselves back together on the road and in the studio. In 2001 they released the mighty AC/DC. The boys were back in town. Into 2002 the singles Muzikizum and Lazy (more on that later) followed before the lads dropped their debut album also titled Muzikizum, the album was critically acclaimed and charted at number 15 in the national charts. A massive success.

Lazy was a track that perfectly summed up the mood of the nation. Released in April 2002 and charting at number 2 in the national. It became the biggest airplay track of the year and won them the coverted Ivor Nevello award ."I had contacted Beedle and co some five years ago after hearing Ballistic Brothers, which I loved," says Byrne, who offered them a slot on his European tour, thinking they were a live band. Hes glad the collaboration finally happened. "I loved the contradiction of a pumping dance track that is called Lazy".

Fast forward to 2009 and the X-Press 2 story continues, house music stalwarts Rocky and Diesel continue to fly the flag as Ashley Beedle has now left the act to focus on his solo career.

2008's album release ?Raise Your Hands?.... X-Press 2's ?Best Of?.... provided a great opportunity to draw a line, from which to start off a new era for the act. In a genre that tends to have a lot of one hit wonders and many changing trends and fashions, some records and artists remain timeless and relevant, like Carl Craig and Josh Wink, Carl Cox and Richie Hawtin for example, X-Press 2 are among these rare treasures. Songs like the Ivor Novello award winning ?Lazy? may have hit the mainstream, but big room speaker bothering ?Smoke Machine? and the instantly recognisable ?Muzik Express? still get played worldwide in a vast array of club nights and remixes of these often pop up to appear on Beatport frequently as do many of their other tracks.

Back in the studio after a year's sabbatical, the duo have been writing some incredible new tunes to be released on Skint. They are working with a variety of different vocalists and are weaving their usual leftfield, deep but strangely accessible sound around some simply amazing new songs. As always the unexpected is to be expected! The artist that brought you the unlikely dancefloor allure of ?Give It? feat Kurt Wagner, and the dark mystery of ?Kill 100? continues in the vein of creating music that is as cerebral as it is ultimately danceable...some very interesting and exciting collaborations are coming including the soon to be omnipresent ?Time? feat James Yuill courtesy of Moshi Moshi, already receiving some amazing reactions with DJs and clubs alike...A songwriter of some considerable skill and panache James has proven to be the perfect partner for the X-Press 2 production sound...With a new straight-up dancefloor track ready to go and a handful of remixes in the pipeline, 2010 looks like it's going to be a busy year for the 2