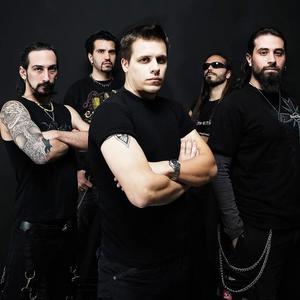 X-Piral were originally formed in 2000 by Nick Papanikolaou (lead guitars) and Dimitris Marinis (Synth & Piano), which have known each other from previous bands. Petros Hatzibiros, friend of both of them, was assigned with the rhythm guitar and Lazaros Damanis the vocals. The first drummer joins a few weeks later. Antonis Petridis (700 Machines) was a really skilful and technical drummer. With this line up, a demo CD was recorded entitled Perfect Lies, at Graffiti Studios on February of 2000. Bass guitar was recorded by Nick Papanikolaou as the band didn't have a bassist at that time.

With this line up, a demo CD was recorded entitled Perfect Lies, at Graffiti Studios on February of 2000. Bass guitar was recorded by Nick Papanikolaou as the band didn't have a bassist at that time. The result was not satisfying enough and the CD never got to the public. Antonis left the band to join 700 Machines as he never really was into the Heavy-Power metal we were trying to build, and as we were disappointed from our recording attempt, the band splits up.

After several months, Nick and Dimitris, decided to give it one more try, so we went on searching for new members to rebuild the band, this time under the name Shadow Play. Petros took once again the rhythm guitar and the search for a vocalist had begun. An old friend of Dimitris, Michael Apostolakis, finally took this place, with a voice fitted for he band's songs, having a weird brutality, and also high notes which we needed. We started, rehearsing the songs from our Demo, with some changes, first in Nick's room, until a drummer showed up and we entered the studio. The drummer was Tolis Makrantonakis, who had a past in some known bands in Thesaloniki, and was skilful enough to play the up beat tracks.

The band remained without a bass player until opportunities for live shows appeared and bassist Kostas Liapis joined the group. The band gave some live shows for a couple of months, until it was realised that there was enough material to start the recordings for a promo CD, which eventually turned out to be a full debut album.

At that time Kostas leaves the band as his musical orientation was totally different and he wasn't satisfied. The band wished him the best and he parted in a most friendly atmosphere. In the summer of 2003 the band entered Power Studios, under the guidance and support of George Stratakis (Rust), and began recordings.

In October of 2003 the recordings started again until February of 2004, when Dimitris left for studies in Italy. Fortunately the band had all the time for Nick to record all bass, rhythm, acoustic and lead guitars and Dimitris to complete keyboards recordings. During the 6 months that Dimitris was away, some of the vocals were recorded but there was no activity due to lack of free time. In the summer of 2004, Dimitris got back and all the vocals were finished until September when the band began mixing the material.

By the time everything was almost finished it was discovered that another band has copyrighted the name Shadow Play and the band name changed to X-Piral.

That was when Giannis Georgopoulos of Burning Star Records contacted the band and after discussion of 2 weeks, it ended up with a deal and a contract.

In February 2005 Poison Eyes was finally out in the shops. Reviews began emerging, some good, some bad, but in general X-Piral had made a good entrance to the music scene.

The music of X-Piral was a combination of 80's Heavy metal with 00's European Power Metal, also featuring some female vocals, which sounds interesting enough.

So with new strength and a label to help, X-Piral found new members, Thanos Tzanetopoulos (Inactive Messiah) on guitars, Makis Petritsis (Wheelrunner) on bass guitar, and Fragisos Samoilis on Drums. All of them are dedicated musicians and metalheads, with their own influences, working hard to build the new sound of X-Piral.

Now X-Piral have almost finished 12 new tracks to be included in the 2nd album, and still composing more. The musical direction is more complicated as 6 musicians with entirely different influences formed these tracks. One can hear Power Metal, Thrash, Rock, Classic Heavy metal, influences from Finnish scene, Scandinavian, American and all this combined with new sound in the instruments. Vocals are not using so much their high notes, which is the most overused capability of singers, but concentrate in low and middle notes, making it more solid.