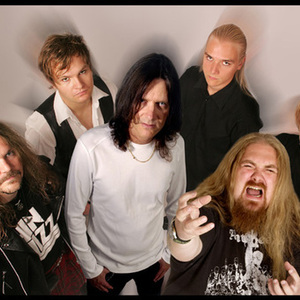 Originally formed in the beginning of the nineties, the symphonic speed metal band Wuthering Heights started to draw attention in the small metal-scene of Copenhagen. Different musicians as well as names like Minas Tirith and Vergelmir have come and gone in the history of the band, and the only founding member in the band today is Erik Ravn. The bands first studio-experience was in 1994/95, when they recorded the Vergelmir demo-tape at the famous Sweet Silence Studio (Metallica, Blind Guardian etc.

The bands first studio-experience was in 1994/95, when they recorded the Vergelmir demo-tape at the famous Sweet Silence Studio (Metallica, Blind Guardian etc.) in Copenhagen. Although the demo-tape didn't quite get the desired production, it accomplished it's task, as it circulated through the European metal-underground where it was well received in countries like Italy and Germany.

The next major event in the history of Wuthering Heights was in 1996/97 when they were one of the bands featured on the compilation-CD "Extremity Rising Vol.2" made by Serious Entertainment. The song used on that CD was "Sorrow In Memoriam", which nicely sums up all that Wuthering Heights is about: Huge compositions, great orchestral parts, folk-influences, intriguing lyrics, up-tempo (speed) and progressive metal.

In summer of 1997 the band finally got a deal with a German record label, who (for some reason) were convinced that the band played gothic/epic metal. This co-operation resulted in the demoCD "Within", which saw the band heading in a more progressive power/speed metal direction, leading to the break-up with this label.


After only a couple of weeks the band were offered deals with different record companies all over the World, and in the beginning of 1998 Wuthering Heights started up the co-operation with the American progressive rock/metal label The Laser's Edge/Sensory.

After having signed an album-by-album deal with The Laser's Edge/Sensory, the recording of the debut album "Within" - part one of an up-coming trilogy - took place in August/September 1998 in the Aabenraa Studios with producer Jacob Hansen.

Artwork for "Within" was done by none other than the highly acclaimed Kristian W?hlin, (known for his work with Memory Garden, King Diamond, Dissection, Bathory, Morgana Lefay a.o.).

After the release of "Within" in October 1999, Wuthering Heights experienced tremendous response from media and fans all over the World. A great deal of interviews were arranged, mainly with Erik Ravn, and the name started to spread throughout the worldwide metal scene.

In late 1999 and the first half of 2000 the band played several gigs in and around their hometown of Copenhagen, using Peter Jensen (ex-Communic, Sinphonia) as stand-in / extra guitarist, and even though this was not the band's proper element (after all, with one member living 2000 kilometres away, it is hard to practice all the time), the concerts went great and the fans seemed to love it.


During the fall of 2000 problems occurred in the Wuthering Heights camp, which resulted in drummer Morten and bassist Kasper leaving the band. But since this was, and still IS, Erik's "baby", Wuthering Heights decided to go on without these two members.'

This line-up recorded and released the next WH masterpiece entitled "To Travel For Evermore". The famous Jailhouse Studio was the surroundings for the recordings of the album, which took place in June 2001 with producer Tommy Hansen (Helloween, Pretty Maids, Twilight, Beyond Twilight, Chroming Rose etc.).

The album is nothing short of a brilliant epos of majestic and symphonic speed/progressive metal. This time with more focus on the technical aspects, better melodies and a huge production! The release of the album was July 10th '02 in Japan (with the bonus track "When The Jester Cries") by Toshiba-EMI, September 3rd '02 in the USA by Laser's Edge/Sensory, September 20th '02 by Sail Productions in Korea and following shortly afterwards with releases in Europe (by Lucretia Records), Russia (by CD-Maximum) as well as the remaining territories.

After the release of "To Travel For Evermore", Erik and the band got really busy with interviews and promotion, but unfortunately they never made it out on tour. Instead Erik soon composed the material for the third disc, "Far From The Madding Crowd", which they recorded in Jailhouse Studios with Tommy Hansen in the summer of 2003.

This time the band found a new singer in Nils Patrik Johansson from the Swedish band Astral Doors (and also featured in Lions Share and Rickard Andersson's Space Odyssey). Nils Patrik is the perfect fit for Wuthering Heights, with his great vocal range, sometimes reminding of Russel Allen, Jorn Lande or even Ronnie James Dio. Erik handled the bass on the recording himself.

"Far From The Madding Crowd" is less progressive and more melodic than "To Travel..." - in many ways it is more of a classic hard rock album with big inspiration from Thin Lizzy to be found throughout the album - but it's still very much what you would expect from any Wuthering Heights release. This time the band have injected even more of the folk-music roots into the songs, and the album functions lyrically as the last part of the trilogy about the lonely wanderer.

The media and fans loved this amazing album, released in December 03 by Toshiba-EMI in Japan, followed by Sensory Records in USA, Hellion Records in South America and Locomotive Music in Europe in January 2004.

In 2004 Wuthering Heights went through some line-up changes, as Andreas Lindahl jumped in on keyboards (instead of Rune Brink), Martin Arendal took the place as lead guitarist (instead of Henrik Flyman) and Teddy M?ller joined as bassist.

The band performed the first gig outside of Europe ever, at the prestigious ProgPower Festival in Atlanta, GA, USA in August 2004. The response was overwhelming and a LIVE CD was recorded which was later on released as a bonus disc with the US release of the 4th album, serving as a document of this great event.

In the summer of 2005, the band did their first gig on European soil in many years, as they played the Park Rock Festival in Sweden iin front of a very enthusiastic crowd. Some of the band?s performance was even broadcast in Swedish primetime TV. At this gig Toke Skj?nnemand stood in for Martin Arendal, who unfortunately had to take a couple of months off from music to nurture his injured hand.

During 2005 Erik began composing the 4th disc, "The Shadow Cabinet". Deciding to go with the same line-up as they performed with in USA 2004, Wuthering Heights was not only rejuvenated, but also experiencing a better internal harmony and friendship than ever before.

During the spring of 2006 the album was recorded using 4 different studio settings throughout Denmark and Sweden, and mixed once again by Tommy Hansen at Jailhouse Studios.

"The Shadow Cabinet", released in October and November 2006, (through Soundholic, Locomotive and Sensory for Japan, Europe and USA respectively), stands as the album that solidified Wuthering Heights' status as one of the most interesting bands to emerge on the international heavy metal scene in recent years.

After 3 years of silence from the Wuthering Heights camp, the time has come for the 5th album, "Salt", to be released. With the same line-up as on "The Shadow Cabinet", Erik and the boys have created their absolutely strongest album to date.

"Salt" sees the band moving into new conceptual territory as the whole thing takes a somewhat maritime twist. While writing the lyrics for the album, Erik found that the imagery of the sea was a great vehicle for his increasingly dark tales of personal and global armageddon. And consequently the music has traded some of its celtic delicacy for the rawness of the sailor?s tunes. The title "Salt" sums up many different aspects of the album?s lyrics - from salty seawinds to salty tears, from the salt of the earth to the salty taste of whisky! And musically the band delivers these "shanties from hell" with burning intensity. Never before has the end of the world sounded this uplifting.

Far From The Madding Crowd

Far From The Maddening Crowd

To Travel For Evermore