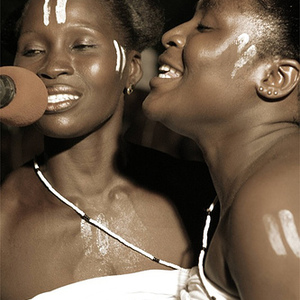 To purely acknowledge the significance and origin of the name "Wulomei," one has to understand the name's position in the grand context of Ga culture. The name "Wulomei" means "chief priests." In his 1971 paper titled Modern Folk Opera in Ghana, Saka Acquaye pointed to the role of the Wulomo (singular) as the chief priest who prayed on behalf of the Ga people. In addition to the role as the chief priest, the Wulomo is the reckoner of the Ga calendar and the trustee of Ga law and custom.

It is no coincidence that the Wulomei performers seen here are dressed as chief priests, and the music is laced with allegories and subject matters that preserve Ga folklore and culture.

Though Wulomei sang in Ga language primarily, the mixture of sea shanties, street songs, highlife and pachanga had a wide appeal beyond Ga-speaking Ghanaians.

The first LP "Mibe Shi Dinn", which was released in 1974, was followed by "Walatu Walasa" in the same year (incl. several hits), which led to a 45-day tour of the United States in 1975. Further LPs on Polydor encouraged and inspired the formation of other bands like Dzadzeloi (Two Paddies Follow One Girl '78, Napoliata '81), and Abladei (Abladei BII '75). Others include Suku Troupe , Agbafoi, Blemabii and Bokoor.