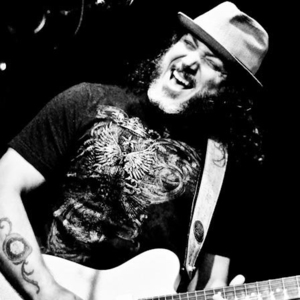 WOODY RUSSELL blows apart any preconceptions about what his next move might be: The vibrant blues/soul outing, "Up Against It", is his long-awaited new album on the CUTS Music Group label and a testimony to Russell's long held passion for the blues. Across nine tracks the recording highlights his incisive guitar chops in a way that no previous release of his has and brings new meaning to the term "contemporary blues".

But, in addition to the stinging fret-board firepower, Woody's vocals pour on the soul and remind us that he absolutely means every phrase, every word. "Up Against It" celebrates, aches, rocks and soothes; his most thoroughly potent recording to date. Here's proof that modern blues is alive and well, and in good hands; not just because he can pull it off, but because - as Woody himself has stated - it's his "only way forward".

Woody Russell's distinctly soulful performances have already won him the respect of audiences around the country. With the release of three previous albums on his CUTS Music label ? including the 2006 IMA "Album Of The Year" nominated Salt - and performances at countless venues from clubs to the prestigious Newport Folk Festival, Russell's top-notch songwriting, guitar playing and showmanship have been years in the making.

For his fourth album, the self-produced "Up Against It", the swagger of Texas blues and hard hitting soul resonate in his impeccable playing, singing and accomplished songwriting. This is not, however, a throwback or retrospective effort: it's a forward thinking, contemporary blues session for the times we live in. Lyrics about "email" and "light-rail" speak to modern times against the backdrop of a heavy shuffle. This album is very much in the here and now - the best of blues has always been of it's time. Woody Russell just happens to be musically shaped by all facets of the blues, as well as, edgy classic soul the likes of OV Wright, Ray Charles, Clarence Carter and Bobby Bland.

...as simple as that