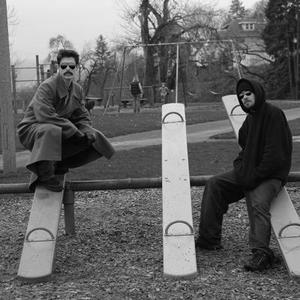 Leading the world in suicide rates, serial killers, and strip clubs, Portland, Oregon is responsible for some of the most pathetically depressing music on the face of the planet. Armed with non-prescription glasses, moldy sweaters, and spines made of jelly, musicians from the Northwest have poisoned the recording industry without regret, resulting in thousands of mediocre songs about vegan politics and chicks named Sarah. In late 2004, Wombstretcha the Magnificent was sent by God to break that trend.

Backed by local producer and vocalist Statutory Ray, Wombstretcha the Magnificent has successfully developed his own genre of music (?date rap?), released two studio-quality albums (The Pregnant Pause EP and The Great Divide LP), and has even received world-wide acclaim for his first underground single (?Soundproof Van?), all without the help of any radio play, professional promotion, or live instruments. After performing his first live show to a room full of strangers who knew more words to his songs than he did, Wombstretcha the Magnificent realized that his prose has the ability to touch people in a unique and special fashion, and has since devoted his life to rap music.

This release is neither a plea for attention nor a request for appreciation. Rather, it is a warning. Lock up your children, your pets, and your medicine cabinets before they are all wiped from the face of the planet without warning or remorse. Although Wombstretcha the Magnificent appreciates and openly welcomes distribution, airplay, and promotion of any kind, the fact of the matter remains; Wombstretcha don't need you. Wombstretcha don't need anybody.

A Pie Full Of Knives