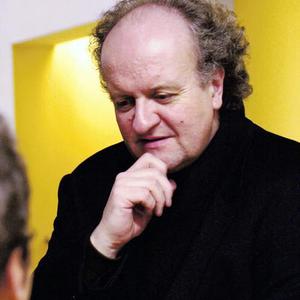 Wolfgang Rihm (b. 13 March 1952) is a German composer from Karlsruhe. He finished both his school and his studies in music theory and composition in 1972, two years before the premiere of his early work Morphonie at the 1974 Donaueschingen Festival launched his career as a prominent figure in the European new music scene. Rihm's early work, combining contemporary techniques with the emotional volatility of Gustav Mahler and of Arnold Sch&ouml;nberg's early expressionist period was regarded by many as a revolt against the avant-garde generation of Pierre Boulez...

Rihm's early work, combining contemporary techniques with the emotional volatility of Gustav Mahler and of Arnold Sch&ouml;nberg's early expressionist period was regarded by many as a revolt against the avant-garde generation of Pierre Boulez, Karlheinz Stockhausen and others, and led to a large number of commissions in the coming years. His work still continues to plough expressionist furrows, though the influence of Luigi Nono, Helmut Lachenmann and Morton Feldman, amongst others, has affected his style significantly.

Rihm is an extremely prolific composer, with hundreds of completed scores, a large portion of which are yet to be commercially recorded. He does not always regard a finished work as a last word on a subject?for example the orchestral work Ins Offene...(1990) was completely rewritten in 1992, and then used as the basis for his piano concerto sphere (1994), before the piano part of sphere was recast for the solo piano work Nachstudie (also 1994). (In 2002, Rihm also produced a new version of Nachstudie, Sph?re nach Studie, for harp, two double basses, piano and percussion, and also a new version of sphere, Sph?re um Sph?re, for two pianos and chamber ensemble.)

Rihm is Head of the Institute of Modern Music at the Karlsruhe Conservatory of Music and has been composer in residence at the festivals of Lucerne and Salzburg. He was honoured as "Officier dans l'Ordre des Arts et des Lettres" by France in 2001.