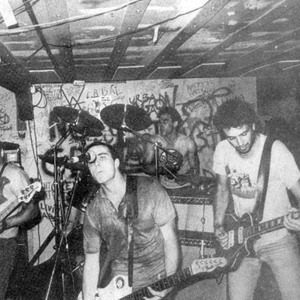 Articles of Faith were an American hardcore punk band from 1981-1985, formed in Chicago, IL. Their sound featured hooks and venom, accompanied by lyrics bemoaning the difficulty of finding freedom and fulfillment in a cookie-cutter, mass-consumption-driven society, typically but not always delivered at a searing pace. While the band's influence was blunted by being based in Chicago, they maintained close musical and thematic ties to the Washington DC / Dischord Records scene.

Drummer Virus X briefly left the band in 1984, due to the relative waning of the band's political emphasis, but returned to record In This Life.

Vocalist/guitarist Vic Bondi was originally a protest singer with decidedly leftist views. He went on to form the bands Alloy and Jones Very after AoF's demise. At the time of AoF's original breakup, Bondi was working as a History instructor at the University of Massachusetts. Bondi's subsequent day jobs included working on Microsoft's Encarta, where he was Managing editor of the Encarta Interactive English Learning edition (Bondi's comments on this fairly ironic form of employment can be found here). Alternative Tentacles Records released the complete discography of the band in 2002. Bondi resurfaced with another politically charged band, Report Suspicious Activity, in 2006 and was featured prominently in the documentary "American Hardcore".

In This Life (Vinyl)