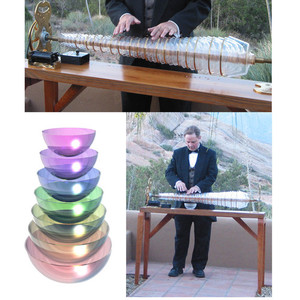 William Zeitler has an extensive musical background: he started piano lessons when he was five years old, and went on to become a classically trained pianist and composer with a degree from the California Institute of the Arts. He put himself through school building and restoring harpsichords and pianos as well as performing. William had never heard of the glass armonica, until in 1995 he came across an out-of-print recording of Music for Glass Harmonica, performed by the late Bruno Hoffman, which included the Mozart pieces composed for the instrument.

William had never heard of the glass armonica, until in 1995 he came across an out-of-print recording of Music for Glass Harmonica, performed by the late Bruno Hoffman, which included the Mozart pieces composed for the instrument.

One of today's premier composers, William Zeitler has the incredible gift to translate the quest for truth and our journey toward self-discovery into his music. Reveling in the wonders of the Cosmos, his Music of the Spheres portrays the soul's journey from Earth into the realm of God. His compositions take us from the grandeur of the mythical land of Atlantis to the trials and tribulations of the quest for the Grail (whatever that is for each of us) and the wisdom we are all seeking. He takes us on these travels using the glass armonica. Hearing William Zeitler and his devotion to the instrument invented by Benjamin Franklin performing his music composed for the Glass Armonica is a concert experience you will not soon forget.

William's book on the history of the armonica will be released 2007 by Glassical Music Inc. This book is based on 9 years of research; William has been acquiring the original source materials from around the world (at least one of which only one original copy has survived) in their original German, French and Latin (many translated by William into English for the first time in this book). William may well have the largest personal library about the armonica in the world.

William is also collaborating with Cal-Glass for Research to manufacture glass armonicas. William paid his own tuition and living expenses through the California Institute of the Arts (supplemented by a California State Scholarship awarded for academic achievement) building harpsichords and restoring pianos, so he is comfortable in a shop setting; he blew glass for 2 years to understand the medium (as William says: "I don't need to blow the glasses myself, but I must have some idea what I'm talking about when I'm talking to a real glassblower); he also holds a Lifetime Teaching Credential in college-level Mathematics, so, as William says, "I can speak 'engineering' and access the scientific literature on the physics of glass bells". Combined with Cal-Glass's decades of precision glass fabrication expertise, they expect to have their first glass armonica 'out the door' in 2007.

In Search Of The Philosopher's Stone

A World With No Tears

Music Of The Spheres

Hymns For The Heart