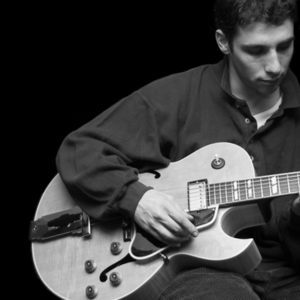 ?William Ash astounds on guitar, performing his original compositions in a hard-swinging trio setting. Guitar players marvel at his technique. William deploys his craft sincerely, and without guile, always drawing on his deep jazz roots.? from the liner notes of the upcoming release, ?Bill's Groove?, Smalls Records. William Ash started guitar at age 9 and when he was 12 and heard the Wes Montgomery trio play ?Round Midnight? and ?Missile Blue ( from the 1059 Riverside record with Mel Rhyne and Paul Parker) it turned his head around.

William Ash started guitar at age 9 and when he was 12 and heard the Wes Montgomery trio play ?Round Midnight? and ?Missile Blue ( from the 1059 Riverside record with Mel Rhyne and Paul Parker) it turned his head around. All through his young teen years he attended the classes Barry Harris held at The Jazz Cultural Theater, and Ted Dunbar's workshops at Jazzmobile. He also had input from Rodney Jones. While at LaGuardia High School for Music and the Arts he played with Abe Burton, Steven Scott, Walter Blanding, Eric McPherson, Jason Lindner and Justin Robinson. As a member of the McDonald's Jazz Band he worked with drummer Greg Hutchinson, and the band often featured major players such as Dave Valentine, Randy Brecker, Steve Turre, etc. During this time he also played regularly with the legendary alto player Clarence C. Sharp with Ari Roland (bass) and Greg Hutchinson., and was the winner of the Young Talent Search of the National Association of Jazz Educators (NAJE). The William Ash Trio was the McDonald's combo Contest winner. He performed as a soloist with a big band at the Oakland Jazz Festival at the request of Buddy Montgomery, brother of the late Wes.

Ash was fortunate to be featured along with guitarists Kenny Burrell, Gene Bertoncini, Ted Dunbar, Kevin Eubanks, Rodney Jones and Jack Wilkins with Rufus Reid (bass) and Akira Tana (drums) on a 2 volume CD entitled ?A Tribute to Wes Montgomery?. The liner notes , written by Dr. Herb Wong characterize Ash as ?simply a beautiful young player whose powerful Montgomery tradition comes shouting with validity.? William has had guest appearances on WKCR and WQXR Radio, and also appeared on TV on The Guitar Show.