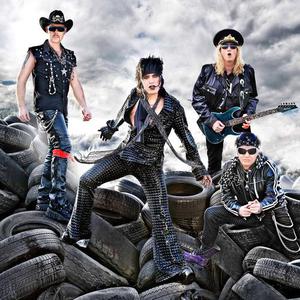 Wig Wam is a Norwegian rock band, which is dedicated to the Glam rock, Glam metal and imitates the style of typical American rock bands from the 1980s. Wig Wam come from Norway, more specifically the county of ?stfold, and they were founded in 2001. Before their establishment the band members were already active in the music business, playing in bands like Dream Police, Artch, Sha-Boom, Ole Evenrud, Heads'N Tails and Alien, or as solo artists.

Wig Wam come from Norway, more specifically the county of ?stfold, and they were founded in 2001. Before their establishment the band members were already active in the music business, playing in bands like Dream Police, Artch, Sha-Boom, Ole Evenrud, Heads'N Tails and Alien, or as solo artists. Wig Wam worked hard to get to the top of the national charts, starting their career with numerous live performances across the country, quickly becoming one of Norway's most popular live bands. Their fan base is known as Wig Wamaniacs.

In 2004 the band released its debut album "667 ... The Neighbour Of The Beast", which was also released in Sweden, after competing in the the Norwegian Song Contest, Melodi Grand Prix (which they won next year with the hit "In My Dreams"). Amongst other things, the album contains a cover of Mel C.'s no. 1 hit I Turn to You. After qualifying for the Eurovision Song Contest in Ukraine, Wig Wam are going to release their album all over Europe, in a new version called "Hard To Be A Rock'n'Roller?In Kiev", including "In My Dreams". Among their musical idols, Wig Wam count the groups KISS, Elvis and AC/DC, as well as the artists Jimmy Page, Led Zeppelin and Marilyn Monroe.

In November 2005 the band released their first Dvd 'Rock 'N' Roll Revolution 2005' showing the highlights from Wig Wam's best year so far. Included in this Dvd is 'Wig Wam Symphonic'

In mars 2006 their second album came, "Wig Wamania", which is released in several countries, such as Japan and Germany.

The tension was extremely high on 21st May, 2005 when 24 countries competed to get the crown of Europe's biggest musical event which took place in Kiev in its 50th edition. Ukrainian TV had decided that the motto for the 2005 contest would be Awakening, following the country's political shifts the year before.

Just like in 2004, ten countries had a reason for partying as the went on to qualify for the Final of the 2005 Eurovision Song Contest: Romania, Moldova, Denmark, Croatia, Hungary, Norway, Israel, Switzerland, FYR Macedonia and Latvia. Unlike in 2004, there was no clear favorite among the ten qualifiers and the 14 who already pre-qualified to the Final. A handful of countries were tipped as the winner.

After an exciting start of the voting, it soon became clear that Greece,represented by Helena Paparizou with the song My Number One, and Malta's Chiara would fight for the crown of European music. Both had already participated before in the Eurovision Song Contest; Helena as part of the group Antique, which came 3rd in the 2001 contest (which was Greece's best ever result at that time). Chiara had also come third in a nail-biting finish in Birmingham. in 1998. However, in the last part of the voting, it became clear that Greece would take the trophy home to Athens. The Romanian entry Let Me Try by Luminita Anghel & Sistem came third after winning the Semi-Final.

Gonna Get You Someday (Single)

Hard To Be A Rock'n Roller

In My Dreams (Maxi)

Hard To Be A Rock 'n' Roller (Single)

In My Dreams (Single)