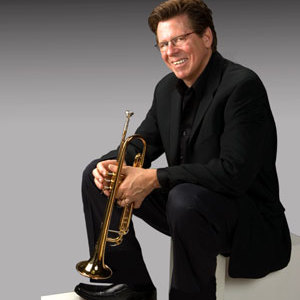 Wayne Bergeron is one of the most highly sought studio trumpet players on the Los Angeles music scene today. After cutting his playing teeth performing in the various Disneyland Show Bands post high school, Wayne landed the lead trumpet position with the coveted Maynard Ferguson Big Bop Nouveau Band in 1986. Wayne can be heard on Ferguson's recordings "Body & Soul", "Big Bop Nouveau", "Brass Attitude" as well as Ferguson's final CD, "The One and Only Maynard Ferguson," released in May of 2007.

Remarking on the talented trumpet player, Maynard Ferguson once said "Wayne is the most musical lead trumpet player I've ever had the pleasure of having on my band."

Bergeron's first solo Big Band CD entitled You Call This A Living? earned him a Grammy nomination in 2004 for Best Large Jazz Ensemble as well as rave reviews from fans and music press world wide. Wayne's latest project is entitled "Plays Well With Others" and features the late great Maynard Ferguson. Wayne recently played Lead Trumpet on what has become Maynard's last studio project in June of 2006 and plays lead trumpet in Gordon Goodwin's Big Phat Band as well.

Wayne is a National Artist for the Yamaha Corporation who recently released the Bergeron Model Custom Yamaha trumpet. Wayne enjoys his work as a clinician/guest soloist and continues to tour in the United States as well as abroad. In October of 2004 Wayne had the honor performing as a featured artist at Stratospheric, a four day festival honoring the legendary trumpeter Maynard Ferguson. In September 2006, Wayne was honored to have performed as a featured soloist at The Maynard Ferguson Tribute Concert in St. Louis, Missouri along with many other world class trumpet players. The Bergeron Model Kanstul Trumpet (Model #1600) is also an instrument designed by Wayne Bergeron by Kanstul of California.

Plays Well with Others

You Call This A Living?