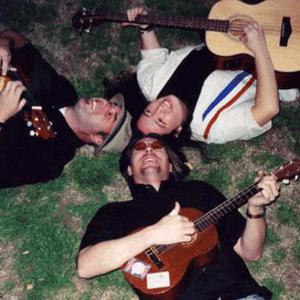 Waste of Aces is a Los Angeles-based pop/folk group that features use of the ukulele as the main instrument instead of guitar. They began as a group of three friends goofing off in a 30-foot yacht with ukuleles and a tape recorder, and have released 3 albums (the latest CD was released in April 2006). The song styles vary somewhat - from radio pop rock to a twist on the old fashioned jazzy dixieland parlor songs. They have performed, among other locations, at several ukulele festivals across the United States.

When three musician friends started messing around with ukuleles, liquor, and a 4-track inside a 30-foot yacht, the band Waste of Aces was born, and strummed onto the underground ukulele scene (yes, there is one) with a bunch of unusual but catchy melodic pop, folk, and jazz tracks. Initially silly and simple in conception, the band grew in ability and began to tackle more complex compositions. The argument - should there be drums? - was tossed around, and as a result several guest drummers sit in on a number of songs, expanding the sound of the band. Many other talented guest artists are often brought in to enhance the variety of instruments/vocals. But the core elements of Waste of Aces remain Jeff's sensitive songwriting/vocal abilities layered on top of Jun's complex fretless bass tracks.