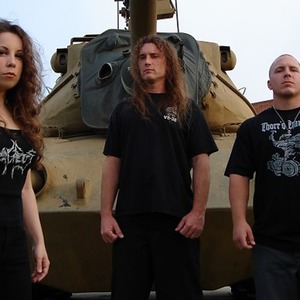 Warface is a brutal death metal-band from San Diego, USA. The band combines aggressive technical riffing with lowbrowed pounding chunk. Warface is a trio with Dave Smith on vocals and bass, Laura Christine on guitar and Tyson Jupin on drums. The original band lineup was complete in January 2001 when they added former drummer Scott Ellis on drums who was later replaced by Tyson Jupin in 2006. World famous BC RICH Guitars have recognized the talent of WARFACE and have featured the guitarist, Laura Christine in its catalog.

KXK Guitars have also recognized WARFACE talent and designed a custom line of KXK WARFACE V Guitars while currently building a signature KXK WAR Bass series. Other artists in the KxK family include Carl Sanders of NILE and Steve Swanson of Six Feet Under. While in Warface, Scott Ellis was showcased and featured as one of the world's most extreme drummers alongside Mike Smith of SUFFOCATION, George Kollias of Nile, Flo Mounier of Cryptopsy and others at www.halfmanhalfmachine.net. The band has received an incredibly positive response and praise from metal audiences, critics, reviewers, metal radio shows and magazines from around the world.

The band signed with Deathquake Records, Inc. in the fall of 2004. Deathquake Records, Inc. took WARFACE back into the studio in late Spring of 2005 to record a full-length album due out in stores nationwide August 15th 2006. Metal, veteran Dave Smith brings ten years of bass, vocal and stage experience to WARFACE. Laura adds another thirteen years of veteran guitar and stage performance. Prior to WARFACE, Dave and Laura played together in the San Diego based death metal act DAMNATION in 1998 until the group disbanded. Previous to WARFACE, Tyson is best known for his work in VILE (Unique Leader, Listenable Records) on Albums "Depopulate" (2002) and "The New Age of Chaos." (2005).