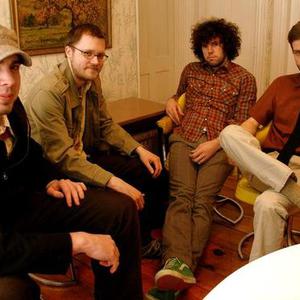 Born of a spontaneous musical connection between Boston-based musicians, Walter the Orange Ocean has built a body of music rich in texture, soul and honesty. The songs and the sound have been likened to that of an early Elton John, Brit-balladeer Aqualung, My Morning Jacket and Rufus Wainwright. Singer/pianist Daniel Burke has been writing and performing music since the age of 15 and while living in the Boston area performed at venues such as Club Passim, TOAD, the Zeitgeist gallery and the old Kendall caf?.

Singer/pianist Daniel Burke has been writing and performing music since the age of 15 and while living in the Boston area performed at venues such as Club Passim, TOAD, the Zeitgeist gallery and the old Kendall caf?. In 2003, he released a solo EP ?Invisible Chains? and was featured multiple times in Passim's Cutting Edge of the Campfire festival.

It was while street performing in Harvard Square in 2005 that Daniel met songwriter/bassist Stu Pynn. Their musical bond became the foundation for a new group. After finding Connecticut drummer Kurt Dyrli and California guitarist/singer Dan Hedley, the band became Walter the Orange Ocean, a name significant of sunrises and sunsets, beginnings and endings. The four began working on what would become their first full length album ?Restless or Sleeping,? finished in October of 2006. Almost entirely self-produced, arranged and recorded in their studio space, it has a very stripped down but warm feel to it. Their waltzy ode to partner dancing, ?Someone Who Loves You,? was a Grand Prize winner in the 2005 We Are Listening songwriting competition and was recorded by the band in London at Sphere Studios with producer Steve Williams.

?This album represents some of the finest songwriting I've heard in years. The songs are beautifully crafted and sophisticated with incredibly haunting melodies...? -Joey Newman, Los Angeles based Film/TV Composer

Walter the Orange Ocean have already captivated audiences at Boston area venues The Paradise Lounge, The Milky Way, Harper's Ferry, and Club Passim, as well as venues in New York City and Philadelphia.