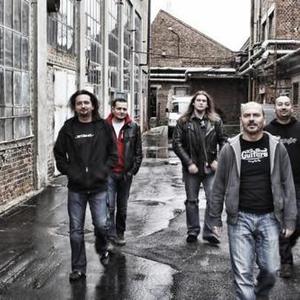 Wall Of Sleep is a brand new company as it was formed in the last month of 2001, though its members are not some feeble greenhorns. The founders of the band, F?leki S?ndor (guitar) and Holdampf G?bor (vocals) both came from the early Hungarian hardcore-scene: from the second half of the eighties, they've played in bands like the more old-school AMD or the complex, Voivod-type Leuk?mia. But their biggest effort was, without any doubt, this fine thing called Mood (emerged around 1994).

But their biggest effort was, without any doubt, this fine thing called Mood (emerged around 1994). That five-piece combo was Hungary's very first doom metal band - during the eight years of Mood's career, they've made four great full-lengths and an EP full of pretty heavy, yet very melodic songs in the Trouble/Sabbath-vein (Vol 1.; Slow Down; Wombocosmic; The Fourth Ride Of Doomanoids and the Burning Slow EP - maybe you can still get some of these records from the band itself, check out the "contacts" file!). Mood was a well-known name in the Hungarian underground and it was a celebrated live-band: both the more conservative metal 'zines and the alternative press praised its name. They've organised Hungarian shows under the name of "Flag Of Doom" (with top bands like Crowbar, Beaver and Spirit Caravan) and "Doomanoids Festival" (with other Hungarian doom/stoner-rock bands). But, unfortunately, this band could just never reach its goals (a real tour, a suitable record company etc.) outside its homecountry. Nevertheless, this thing was not the cause of the band's split: in a nutshell, the whole thing - the music-side of the story as well as the personal relationships - have just grown tired around the second half of 2001. The other half of Mood plays now under the name of Stereochrist. It was time to move on.

Wall Of Sleep tries to move further in the path of Mood into a darker, deeper and gloomier musical world. But the attitude is just the same. As G?bor wrote: "We've formed this band to raise the flag of doom still high. All those musical traditions feed us that come from the legacy of the mighty Black Sabbath - the music that bands like St. Vitus or Obsessed kept alive during the years. A small, but enthusiastic, fanatic group of musicians, fans, record labels and fanzine editors working on and on to keep this music alive, the music that means so much more than some well-known melodies and slowed down riffs. We'd like to add our own thoughts and emotions to this special universe - our goal is that simple. Our motto is: Slow but not dead!"

They've found their partners in crime soon. Marek Ferenc, the bassist played on the second and on the third Mood-record, Greff Andr?s, the other guitarist plays in this doom/stoner-influenced Hungarian indy band called Convoy as well, and the drummer became Szolcs?nyi Szabolcs, a real local talent. The band's first gig (with warm responses) took place in a small festival (with metal bands) organised by the guys from the "heavymetal.hu" webzine; in february 2003, Wall Of Sleep was the support band in the High On Fire/Mastodon-tour's Hungarian stop in G?d?ll? - again, a perfect evening with such great bands.

At the end of March 2003, PsycheDOOMelic Records (a new independent record label formed by Heged?s M?rk, the man behind the great Psychedelic fanzine) released the band's debut EP "Overlook The All" with four songs on it. This stuff was getting distributed in fifteen countries, mostly by small independent distributors with mail-order shops. The EP's got very warm and positive feedbacks from all over the world (from underground fanzines as well as bigger magazines like Germany's "Rock Hard" or the Netherlands' "Aardshock") and more than a thousand of copies have been sold worldwide. In the summer of 2003, the band has played at Hungary's biggest open-air event, the famous "Sziget"-festival. In October 2003 Wall Of Sleep did its first European clubtour with a couple of dates in Germany, Belgium and the Netherlands with such cool bands like Thee Plague of Gentlemen or Elephantum - and this tour was a success, just as the band's late-October show in Budapest, Hungary opening for DC hardcore-stars Darkest Hour!

After the tour, the band recorded its first full-length called "Slow But Not Dead". This one is turned out to be a pretty diverse one: here you can hear some very heavy, dark and riff-driven songs as well as bluesy ballads or even a harsh sounding tune with a punk rock attitude! And of course the heart-shaking vocal and guitar melodies are still trademarks of this band! Slow But Not Dead was released in the first week of February 2004 by PsycheDOOMelic Records, and will be distributed worldwide. The band is playing a couple of bigger festival gigs in Hungary this spring, and they'll try to make another short European tour in early April. And Wall Of Sleep will be part of the second Doom Shall Rise festival (2nd and 3rd of April 2004, G?ppingen, Germany), that's for sure - we are very proud of it, 'cause that's the biggest European event of this genre.

...And Hell Followed With Him

Slow But Not Dead