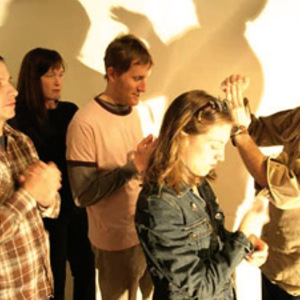 Over the last seven years, Minneapolis-based pop group Walker Kong has been on a mission to pour silver icing over a raw collection of mega-hits. Their latest album, Deliver Us from People, brilliantly captures the band's live shambolic glory while continuing to integrate the highly reflective sound present on their two previous full-lengths. Exploring the relationship between animals and humans in modern times, Deliver Us from People is nothing less than a rave-up brimming with eternal love, fatal sacrifice, and the wonderful tragedy of symbiosis.

Formed in the spring of 1998 they were originally known as Walker Kong and the
Dangermakers. The group had high ambitions even though the only trained musician
was songwriter Jeremy Ackerman. The rest of the group: Emily Cahill on drums,
Alex Ackerman on bass, Sara Vargas on keyboards and Katie Kanwischer on
percussion were for some odd reason very willing to make this experiment a
serious endeavor. Sometimes practicing 5 times a week, the band slowly built up
the nerve to record their first lp entitled the early years, which despite it1s
lack of technical luster some how put them on the map in their hometown of
Minneapolis. Two successful ep's followed that highlight the bands progression
from naive pop status to genre splitting song crafters. Those ep's won the band
a number of awards from local newspapers including best pop group as well as
holding a string of #1 hits on kuom 770 (University of Minnesota College Radio).

Throughout all this WALKER KONG and the Dangermakers had remained primarily in
the bounds of the Midwest, knowing their style was rapidly changing and not
quite ready for the world at large. Dropping the Dangermakers from their moniker
they are simply know as WALKER KONG. At this time they added veteran musicians
Tony Mogelson on guitar and Kevin Riach taking over on percussion. This was the
line up that would eventually be thrust into the atmosphere.

Now the time has come and WALKER KONG are finally the band they wanted to be.
With this in mind, you should hear their new album There Goes the Sun which will
be released in the U.S. by Magic Marker Records this July. Containing many
shifts in tempo, the album contains a mood that was meant to feel like the last
day on earth. Songs about failed cities, self indulgent couture, faded memories,
and the end of the world are assembled to evoke a soundtrack of solitude.
Pastoral dance music that you dance to alone. Your soundtrack. Make no mistake
though, this is not a manifesto, it is a pop record that treds happiness and
sadness with great pleasure. With many nods to influences, you will hear Talking
Heads, Orange Juice, the Go-Betweens, the Meters, Nillsson, John Cale and
numerous others. More than anything, you will hear WALKER KONG. That's who they
are. If you wish to experience the band live (a very different experience!) you
may go to digitalclubnetwork.com and view a show the band played with Broadcast
last November.

Deliver Us From People