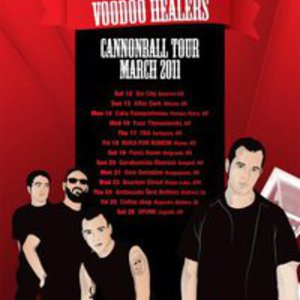 During the summer of 2003 in a basement somewhere, the band started unfortunately without a stable lineup: that's why it took so long to record the material the band is playing since the beginning. The first ?Voodoo Healers? rehearsals were like small parties with a lot of booze and good vibrations. They played covers from their favorite bands and, as time passed by, some songs of their own. Very soon came the first lose, the lead guitarist.

After that, they decided to work as a trio on the material they had at the time and on new songs. Working really hard for almost 2 years in the studio, they recorded more than 15 tracks, doing all the work by themselves? Just about the end of these recordings, the drummer decided to stop playing, so they found another. Had some gigs for the year to follow, with the original bass player moving in guitar and a new bassist join the band. They had gigs in Thessaloniki and other cities, but the drummer was a problem once again, so they found another and a new bass player, hoping this will be a stable line up. In the mean time they finished the job which started almost 3 years ago, and finally the first ?Voodoo Healers? CD is out, the outcome was 11 tracks all written by the band. ?Living In A Dogville? album was only the beginning for future releases from ?Voodoo Healers?. Right after the release of the ?Living In A Dogville?, a new line up formed and the band had the opportunity for some gigs. 2007 ends successfully with the ?Voodoo Healers? touring in Bulgaria and also in Greece? For the last year [2008/9?], the band start working again in the studio in new material, planning a full album release during 2010 but also some split 7" releases... Voodoo Healers will be one of the bands for the upcoming compilation "White Trash Fever", a very first try from 5 labels from Bulgaria, Greece and Serbia.

Living In A Dogville