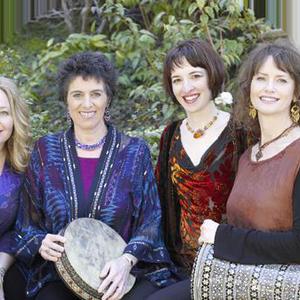 - Linda Hirschhorn
Director, founder and primary composer for Vocolot, Cantor Linda Hirschhorn has released two songbooks and eight recordings of original material (four with Vocolot). Her songs and choral arrangements have been published in major folk anthologies, are performed by professional and amateur groups around the world and have been used in video, radio documentaries and dance scores. "Circle Chant," the most widely covered of her songs, is sung around the world. Linda organized and directed the first Jewish Women's International Chorus in Kiev (1994). In 1999, Linda was commissioned to compose works for "Seeds of Peace," an international project that brings youth and national delegates from areas of conflict throughout the world into dialogue and creative collaboration. Linda has been Cantor at Temple Beth Sholom, San Leandro, CA since 1988, and was one of the founding members of Kehilla Community Synagogue in Berkeley. She is the mother of two children. "Holding one's own while singing in harmony" is the paradigm by which she thinks communities will survive and thrive. To find out more about Linda Hirschhorn, visit www.lindahirschhorn.com, and to find out about wedding celebrations, visit www.weddingcelebrant.org. Linda's latest album, Becoming, was released July 2007.

- Julia Bordenaro
Julia Bordenaro, award winning singer-songwriter, pianist, and recording artist has been charming audiences for years. In addition to Vocolot, she tours extensively with her husband, Ira Scott Levin, reaching listeners of all ages with their sacred and secular original music. www.thelevinsmusic.com.

- Liz Stuart
Elizabeth Stuart plays percussion with several Middle-Eastern ensembles. She has performed live as a percussionist with Anne Bluethenthal and Strong Current dance companies and composed and recorded original music scores for 3 modern dance pieces choreographed by Chimene Pollard. She has arranged, sung, played keyboards and composed for musical theatre, rock and new music genres and has over 12 years experience as a sound designer and video game producer. www.myspace.com/lizstuartmusic

- Shana Levy
Shana Levy's vocal experience goes back to early childhood, as she comes from a very musical family. Vocolot is Shana's third women's a cappella group, after the nationally recognized collegiate group, the California Golden Overtones, and professional ensemble, Calamity Jane. Shana has performed extensively in musical theater productions and is an accomplished dancer.