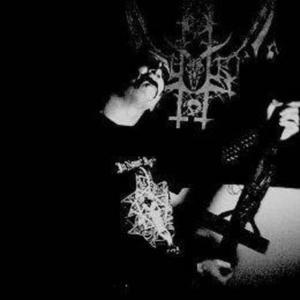 Vociferian is a one man band orchestred by Lord Genocide since winter 1999. Lord Genocide, also involved in many other musical projects like Crux Dissimulata, L?ger, Conj?rat?r, Widomar and a few more private projects. The band has been created in France, it is there the first riffs of Vociferian were born. The style of Vociferian is hard to describe, taking roots on the pioneers of the genre while producing a sound and musical content all very personnal, very rich.

We could say the first album of Vociferian, "Preludium to Massacre", was rather depressive with a raw sound, atmospheric passages, supported by a frenetic and psychotic chant. It first got released in 2000, as a demo CD-R. Being well received, this demo got reissued in 2003, on tape format, by Voicea Succubus Records. Thus, its finaly been turn of the Quebecer label, Autistiartili Records, to finaly release a CD version, in 2004.

The second opus, "Triumphant Usurper Beast" was in the vein of the first one, but way more aggressive and efficacious, less in melody and flourish, stabbing straight to heart. This album has been pressed as CD by Time Before Time Records in 2005. The same year, it also been distributed as a tape by the Swedish label, Total Holocaust Records.

From there, Vociferian got oriented towards a way different Black Metal, a cavernous Black/Death, for its collaboration with Goatholocaust, released as a split CD entitled "Ma?tre Bouc". The part of Vociferian being called "Nekrocryptic Monolith Ov Regression". This split has first been released on tape, in 2004, by Voicea Succubus Records, and later, on CD by Regimental Records, in 2006.

Then, "Exxakschionnistiik Warmageddon Xzul", a basic and efficacious album, in the vein of the firsts of Impiety and Impaled Nazarene, released by Meurtre Noir, on CD, in 2005.

The mini album "Universal Hate Decades Ultimatum" was very close to the split with Goatholocaust, what than the approach was nevertheless different, with a better sound. Five shell shards, collected on CD, by Infernus Rex, in 2005.

It is with "Beredsamkeit" that Lord Genocide came back to roots. An album all in atmosophere, a naturalist portrait with atmospheric melodies and frozen sound. It is Morbid Moon Records, label from Montreal, that handled the task. The release did happen under CD format in 2006.

The next opus to be out, in January 2009, on Croquemort Productions, is an equaly personnal and majestuous masterpiece, on both visual and musical sides. The guitars are more present and numerous, while lyrics are wrote in French and the concept of the album is taking source into the apocalyptic visions of St-John, spearhead of the human vermin's greed and its "salvation" vector, christian hypocrisy.