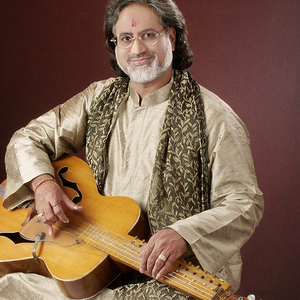 Pandit Vishwa Mohan Bhatt (b. Rajasthan, India, 1952) is an exponent of Hindustani music (North Indian classical music). Vishwa Mohan Bhatt is one of the most celebrated shishyas (disciples) of the Sitar virtuoso Ravi Shankar. Born in Jaipur in Rajasthan in July 1952, he is the younger brother of Shashi Mohan Bhatt; who was one of the first three students to study with Shankar circa 1949/50, and the father of sitarist Krishna Mohan Bhatt.

Much of his formative musical education came from his family. His father Manmohan Bhatt taught and as a boy Vishwa Mohan Bhatt soaked up his father's singing, compositions and ragas.

Bhatt originally did not mean to pursue a career in music. He prepared for the security of the Indian civil service while studying sitar and violin. Around 1967 he found a Spanish Guitar left behind by a German student at his father's music school in Jaipur. Bhatt claimed it for his own and set about remodelling it. After experimenting with the instrument's structure, left and right hand techniques, various objects to produce the slide sound and strings, he modified the guitar with the addition of several drone strings and eight sympathetic strings, playing it like a Hawaiian slide guitar to get the sustained, sliding notes common to the vocal style of Indian classical music. Thus the 'mohan veena' was born, named after himself and Vina or Veena, the generic Sanskrit word for a stringed instrument. It is an instrument that appears to be a hybrid of a classical Spanish guitar and a sitar. The Mohan vina sounds somewhat like a Western slide guitar and is played with sitar mizrabs (wire picks) and a thumb pick and a polished steel rod for the slide. The combination of melody, drone, sympathetic strings and Bhatt's microtonal approach to melody, however, place it firmly in an Indian cosmos.

Although he had had established himself as a recording artist in India as early as 1970 and had toured and recorded with his guru abroad (including Shankar's ambitious Inside The Kremlin from 1989), his major international breakthrough came with the album A Meeting By The River, a collaboration with American slide guitarist Ry Cooder that would be awarded a Grammy award for Best World Music Album in 1994. Bhatt was not the first Indian to win a Grammy Award. It is for this album and other fusion and pan-cultural collaborations with Western artists like Taj Mahal, B&eacute;la Fleck and Jerry Douglas, rather than his own unique take on Indian classical music traditions that Bhatt is best known, although exposure such as an appearance on the 2004 Crossroads Guitar Festival, which was organized by Eric Clapton, does allow for this side of his playing to reach a larger audience. He was awarded the Padma Shri in 2002.

He currently resides in Jaipur, Rajasthan, India, with his two sons and his wife. His elder son Salil Bhatt is a renowed Mohan Veena player, while his younger son Saurabh Bhatt is a well known music composer.