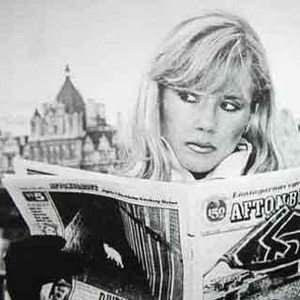 April 29th 1981 saw the release of Virna Lindt's and Compacts Firsts ever single a year to the day of the death of Britain's film autocrat Alfred Hitchcock. Following in the Great tradition of the Hitchcock blonde, this Swedish voice-over specialist managed to combine the careers of journalist, literary scout, designer and pop star while carving for herself a niche on the fringe of pop's unconditional frizz.

As her looks echoed the charm of Grace Kelly, Kim Novak and Catherine Deneuve, "Attention Stockholm" plotted a course from the Portland spy scandal to Bond, Mr Solo and his Russian friend and the fates of both Raoul Wallenberg and Dag Hammarskj?ld, National Heroes in her Native Sweden. "Young And Hip" found the girl that never was in a lighter mood as she mimicked a shop-girl displaying a new fadgadget. "Intelligence", an abstract version of the nuclear boat-race, lived in a jacket which featured a C.N.D. birthday cake spawning enquiries which choked the Compact switchboards. The subsequent LP "Shiver" embellished these themes with Virna balancing between light and shade on "Underwater Boy", "Pillow Talk", and her own spoof of her credentials on "The Dossier On Virna Lindt". "I Experienced Love", a perfidious look at love on location, was chosen as the single. Virna's second LP "Play/Record", constructed on the spot on a three week holiday in London appears as a musical booby-trap as she tackles the subject matter of a girl who can't stand the colour red, subterfuge and skulduggery in her inherited hometown and the numbing effect of the new media.

Hitch would have loved it.