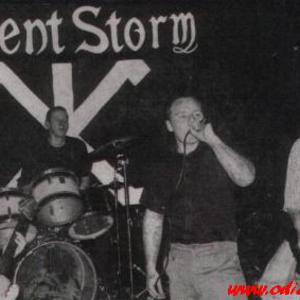 1)A R.A.C. band out of Cradiff, Wales, Violent Storm mixed up punk and metal influences to make a totally unique sound for their time, with lyrical content of racial issues, class, the IRA, and hooliganism. Violent Storm got their start in 1986 and lasted until 1992, when 3 out of 4 band members died in a car accident on their way to the airport to play one of Spain's first R.A.C. festivals. The festival went on as planned, but the bands added a moment of silence for their departed friends.

Billy(singer), went on to form the WP band "Celtic Warrior", which was named after Violent Storm's first and only full length album. "Celtic Warrior" still tries to keep Violent Storm alive by playing their songs at shows. Billy also went on to be in another WP band called "The Order" and write lyrics for Brazilian band "Fist of Steel".

2)Not to be confused with the RAC band Violent Storm {pictured} who released the album Celtic Warrior.

In addition to KK Downing, who Executive Produced "Storm Warning" and played guitar on the tracks "War No More" and "Deceiver", other guitar duties are taken up by Yngwie Malmsteen, who contributed to the tracks "Fire In The Unknown"and "Pain Is For Me". The album was also mixed by world renowned producer Roy Z who is also a Guest Musician on two tracks.

The driving rhythms and compelling melodies of these songs stay in your mind, inviting a deeper experience with each repeated listening.

Land Of My Fathers (EP)