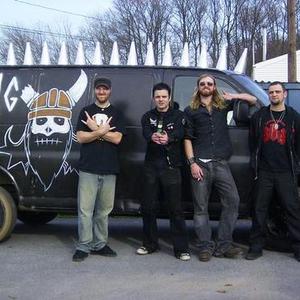 "Get in, Get Fucked and Get out", these are the 7 words that prompted the existence of Viking Skull. Realizing that the 4 years on the road with Raging Speedhorn had temporarily stopped for a well earned break, assorted members of RSH band and Crew faced the very real prospect of the booze drying up for a few months. Roddy Stone, RSH's long time guitar tech reasoned with the rest of Speedhorn, still left in Corby, that all they had to do for the free beer to continue was form a local band and play local clubs. "It's gonna be easy" he said, "All we gotta do is, get in, get fucked and get out."

So, as with many great things in rock music, the impetus for the formation of Viking Skull was alcohol. Free alcohol at that. For Roddy, Darren, Gordon, Frank and Waldie, the lure of a free pint was enough to encourage them to play a few songs at a local jam night, held weekly at the ex-serviceman's club in their home town of Corby. Their improvised sessions combined foot-stomping old-school metal riffs with bluesy overtones and elaborate guitar solos. The ex-serviceman's club shut down, but that wasn't going to get between these musicians and their beer, and they soon relocated to the jam night at Kettering Town Football Club a few miles away.

As their appearances grew ever-more frequent, the five piece decided that some rehearsal time would give them a chance to fine-tune their style and write some original songs to play, rather than resorting to covers. With more free pints and the eye-catching name of Viking Skull, the bands local notoriety and popularity grew until, in early 2002, they decided to lay down some of their self-penned songs.

Known simply as "CHAPTER ONE", the E.P. was released October 6th 2003. The band's first performances outside of Northamptonshire arrived in October 2002, when Gordon, Frank and Darren found themselves with a double workload as Viking Skull filled the empty support slot on Raging Speedhorns UK tour. It was obvious that the Viking Skull name was beginning to spread when several fans turned up to the gigs with home-made Skull t-shirts. The local shows also continued, including a fated night supporting Dukes of Nothing where the gig was canceled in the middle of Viking Skul'ls set because the floor collapsed under the feet of the furiously manic mosh pit.

Increasing interest in the band led the five-piece to take Viking Skull to the next level, with a UK tour followed with support slots with rock icons such as Alice Cooper, HIM, Clutch, Cky and Dio. While doing these tours the heavy workload began to take its toll on Franks personal life meaning the five piece not long became the four piece we know today with Roddy returning to his axe. The music of Viking Skull exudes cool confidence which regularly escalates into arrogance. Mixing Black Sabbath's groove, Deep Purple's pulsing rhythms and AC/DC's libido, The Skull have come to fuck you up.

Cursed By The Sword