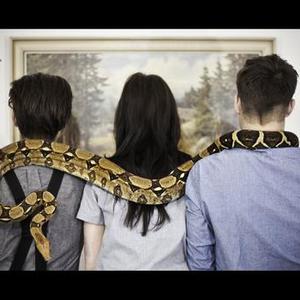 There are six artists called Vienna. The most well-known is an Austrian synth-pop act (1). 2) is a japanese prog/hard rock band, 3) American indie acoustic rock group, 4) French synth-pop act. 5) a Belgian Poppunk/punkrock group, 6) an electronica trio from Berlin (1) Vienna was formed by veteran Austrian session keyboardist and producer (Frank Zappa, etc.) Peter Wolf as a vehicle for his wife, singer Ina Wolf. One album was released under the Vienna name, 1987's Guess What? The single was Talking With the Heart whose innovative video still receives airplay on Vh-1 Classic in the U.

(2) Vienna is a Japanese prog/hard rock band. Their first album "Overture" was published in 1988. They made two albums and one live cd before they split. In 1998 vienna starts a come back with a new drummer. Their new album "Unknown" was published.

(3) Vienna are an indie acoustic rock band based out of Baltimore, Maryland. Vienna are John Cotter and Matt Wood. The duo first collaborated in 2002, writing songs together and performing at small venues. Their self-recorded first album which was released on May 13, 2006. Vienna's lyrics come from personal experiences and observations. As Matt says, "We write what we know." The songs are about life, truth, and relationships. Death, love, and exposing lies. In November 2006, Vienna officially disbanded, as John Cotter's time and energy were redirected toward The Apathy Eulogy.

John Cotter started playing guitar at the age of 16. His first attempt at singing/writing music was with Alissa Robison in 1997; They wrote a few songs together. John recorded a twelve song solo album in Summer 2000 with the recording help of Chris Wilson and Jason Rundell. John currently writes and records solo music but his main focus is The Apathy Eulogy.

Matt Wood played bass for a band called Many Sparrows. They played a few gigs, never recorded. The band split up in 2002.

John and Matt met at Loch Raven High School Young Life through mutual friends. Matt asked John if he wanted to form a band and so they did. The name, Vienna, was chosen because Vienna is a city in Austria which many consider the birthplace of classical music.