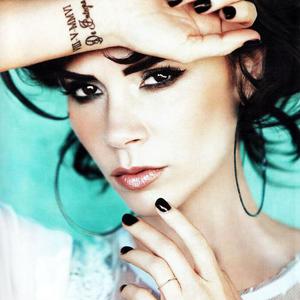 HERMES During her rise to fame with 1990's pop group the Spice Girls, Beckham was dubbed Posh Spice, a nickname first coined by the British pop music magazine, Top of the Pops, in their July, 1996, issue. Since the Spice Girls followed separate careers, she has dabbled in pop music, scoring four UK Top 10 singles as a solo artist. Her first single to be released, "Out of Your Mind", reached number two in the UK Singles Chart and is her highest chart entry to date. During her solo music career she has been signed to Virgin Records and Telstar Records.

Beckham has found more success as an internationally recognized and photographed style icon. She has had a career in fashion, designing a line of jeans for Rock & Republic and later designing her own denim brand, dVb Style. Beckham has brought out her own range of sunglasses and fragrance, entitled Intimately Beckham, which has been released in the UK and in the United States. In association with the Japanese store Samantha Thavasa, she has produced a range of handbags and jewellery. In addition, she has released two bestselling books; one her autobiography, the other a fashion guide.

In her television ventures, Beckham has had five official documentaries and reality shows made about her, some of which include Being Victoria Beckham and The Real Beckhams. Her last documentary to date was Victoria Beckham: Coming to America which documented her move to the United States with her family in 2007. She since made a cameo appearance in an episode of American TV series Ugly Betty, and been a guest judge on Project Runway, Germany's Next Topmodel, and American Idol (Season 9).

Victoria is married to English footballer David Beckham with whom she has three sons. As of 2009, the couple's joint wealth is estimated at ?125 million.

On 14 August 2000, Victoria released her first solo single, "Out of Your Mind" in collaboration with Dane Bowers and Truesteppers. The week of release coincided with the release of "Groovejet (If This Ain't Love)" by Spiller ft. Sophie Ellis-Bextor, resulting in a chart battle dubbed 'Posh vs. Posher' by the tabloids. Following a huge publicity campaign, "Out Of Your Mind" was outsold by Ellis-Bextor, and debuted at number two in the UK Singles Chart. Before the single's release, on 8 July 2000 she made her public solo debut at London's Hyde Park at a concert to raise money for the Prince's Trust charity. She sang "Out of Your Mind" to a 100,000-strong audience.

Beckham then signed recording contract with her group label Virgin Records. Her next single as a solo artist, "Not Such An Innocent Girl", was released on 17 September 2001. Again, she faced competition in another hugely hyped chart battle, this time with Kylie Minogue's single "Can't Get You Out Of My Head". Despite a huge promotional campaign, Beckham was outsold eight to one, and the single debuted at number 6. Beckham's debut album, eponymously entitled Victoria Beckham, was released on 1 October 2001, and reached number 10 in the UK album chart. The album cost a reputed ?5 million to produce and it sold a modest 50,000 copies.

The second and final single to be released from the album was "A Mind of Its Own" on 11 February 2002. The single reached number 6 in the UK and sold 56,500 copies. Rumours soon started spreading that Beckham was soon to be dropped by her label for not charting in the top 3. These were strongly refuted at the time. Beckham commented "You know what newspapers are like, they just like to put all the negative stuff in, but as far as I'm concerned and the record company is concerned it is all great."

A third single, "I Wish", was promoted but never materialized. The single version was a remix featuring Robbie Craig, and was performed on TV on Friday Night's All Wright. Following the announcement of Beckham's second pregnancy, the single was shelved. Beckham was then departed from the label Virgin Records. A statement was issued, which read "No-one has been dropped. The Virgin deal has come to a natural end and both parties have decided not to continue."

Telstar Records signed Beckham in 2002 in a deal made with Simon Fuller's 19 Management. The contract was worth ?1.5 million. Beckham spent much of 2002 recording a pop-influenced album called Open Your Eyes which yielded the single "Let Your Head Go", but she allegedly chose not to release it after being disappointed with the results. Instead of pop, Beckham wanted to record tracks with a more RnB and hip hop influence, creating a more urban sound. She began working with urban producer Damon Dash. During this time, it was reported that Dash slighted Beckham, stating "If we can make Victoria hot, we can make anybody hot." When he was first asked why he was working with Beckham he stated "Because I see how much she gets photographed over here." A Dash-produced track "It's That Simple" featuring M.O.P. was created, and received a premiere on radio stations in July 2003. This generated mixed reviews, and further criticism, with the feeling being that Beckham was far from convincing as an urban act.

Beckham's first single with Telstar Records, "Let Your Head Go / This Groove", was released in the UK on 29 December 2003, following heavy promotion and many TV appearances across the Christmas period with the video being directed by Andy Hylton. The single charted at number 3 in the UK. This double A-side lifted "Let Your Head Go" from Beckham's earlier pop-inspired work with "This Groove" one of her Hip-Hop/R'n'B songs and remains Beckham's last single release to date. She is currently the only Spice Girl never to have had a British solo number one, though she is also the only Spice Girl to have all her single/album releases go Top 10. Outside of the UK, Damon Dash had plans for Beckham in the United States, including a potential release of "Let Your Head Go / This Groove" under the name of "Posh Spice Victoria Beckham". The release was proposed for sometime between March to May 2004, but never occurred.

With the UK media describing her solo music career a failure, and combined with a rumoured fall-out between Dash and Fuller, her hip hop album, Come Together, was not released. Amidst the collapse of Telstar Records, remaining plans for Beckham's music career were cancelled.

Victoria Beckham is the only Spice Girl to have all of her singles and albums chart in the top 10 of the UK charts, but she also has released fewer albums and singles.