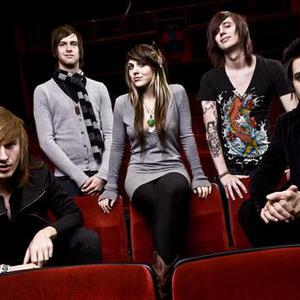 VersaEmerge was formed by former drummer Anthony Martone and guitarist/vocalist Blake Harnage back when both members were in high school. Although the duo instantly experienced regional success selling out their first ever gig and gaining critical acclaim in their local music scene, it wasn't until the band solidified their line-up?which currently includes guitarist Harnage and vocalist Sierra Kusterbeck?that things really started happening for this dedicated group of young adults.

?When Sierra first tried out for the band we didn't know what to expect,? Harnage explains, adding that the then sixteen-year-old female vocalist lied about her age in order to land an audition. ?She's always been amazingly talented, but now she's learning how to use that talent to its full potential.?

At the age most of us would be concerned with sneaking into R-rated movies, VersaEmerge were busy crafting an EP of original material called Perceptions that attracted the attention of Fueled By Ramen Records. In addition to listening to everything from Bj&ouml;rk to Thrice during their free time, the band have toured with artists in nearly every genre and taken a little bit from each of these varied experiences in order to come up with something completely unique and unprecedented when it comes to their own music.

?We've gone on tour with everyone from dance-pop to metal bands,? Harnage explains with a laugh. ?I guess people seem to think that we can play with pretty much anyone.?

The band has toured with everyone from Chiodos to We the Kings; and the band spent time refining their new material and releasing their debut EP for Fueled By Ramen with James Paul Wisner (New Found Glory, Underoath). After successfully releasing the EP, the band was invited to play the 2009 Vans Warped Tour.

On September 19th, 2009 it was announced on his Twitter page that drummer Anthony Martone, a founding member of VersaEmerge, would be parting ways with the band. Spencer Peterson, of the disbanded Hidden in Plain View, revealed via Twitter that he would be filling in as drummer for Versa's upcoming fall tour. About two months later, Jerry Pierce announced his parting with the band with a message on Twitter stating that the day's show was his "Last show with VE." because of "Family stuff. It has nothing to do with my band-mates- they're my best friends in the world I just cant keep touring as much as VE does."

The band followed up on the release of their FBR debut album "Fixed At Zero" in June 2010, with an appearance on the entirety of the Vans Warped Tour 2010. VersaEmerge have just wrapped up their first headlining tour with Anarbor and Conditions, and will be heading out on the AP Tour this spring with Black Veil Brides, Destroy Rebuild Until God Shows (D.R.U.G.S.), I See Stars, and Conditions.