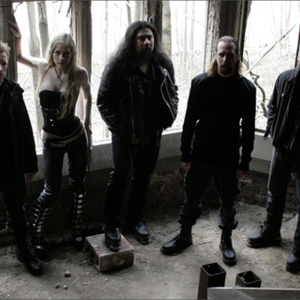 v e n e f i c u m: The Poisoner; the one who brings death ??the grandiose overtures convey a vast atmosphere, but it is never mechanical or robotic, rather wondrous and infinite... all rendered in suitably pristine fashion from the Finnvox production.? - Digital Metal ?With structured songs, freezing vocals, and intelligent lyrics, this is surely a band that will wake some people up.? - PIT Magazine ?Devoid of satanic and overused, occult references, Veneficum focus on more philosophic and scientific issues while keeping its musical roots in symphonic blackness. ? - Jackal Blaster Zine

??the grandiose overtures convey a vast atmosphere, but it is never mechanical or robotic, rather wondrous and infinite... all rendered in suitably pristine fashion from the Finnvox production.? - Digital Metal

?With structured songs, freezing vocals, and intelligent lyrics, this is surely a band that will wake some people up.?
- PIT Magazine

With such powerful descriptions and critical acclaim, what else can one expect to hear? Hailing from Chicago, Veneficum is a diverse mixture of modern black metal that incorporates a wide range of influences from Mayhem to Devil Doll. The ensemble is highlighted by the stark contrast of elements from the shrill, tormented vocals and the moody swells of the layered keys to the tight precision of the guitars and drums. The following is a short history of the band and it's members.

Veneficum came into existence in October 1999 with the original lineup consisting of guitar players Mendoz and Ceja, drummer Nacht, keyboardist Jason, and bassist/vocalist G.Reymond. The band recorded their first promo CD in mid December of 1999, with their first ever show at the New Jersey Metal Meltdown Festival in March of 2000 followed by Milwaukee Metalfest XIV later in the year.

Veneficum's first official release, Dysphoria, came in June 2001. This was recorded & mixed by the band in their own studio, Studio Black Aura. Soon after the release of Dysphoria, the band had parted ways with founding member and guitarist, Ceja, due to musical differences. Veneficum went on as a four piece rehearsing and playing shows, making another appearance at Milwaukee Metalfest XV in top form. In October, guitarist Aric was recruited into the band to fill the void left by Ceja. Veneficum began writing new material extensively in 2002 while also performing at the Milwaukee Metalfest for the third year in a row.

Veneficum had entered the newly revamped Studio Black Aura in early January of 2003. At this time, founding guitarist Mendoz had exited the band. Guitar virtuoso, Chris H. came and added some incredible soloing and added a new element to the Veneficum sound. As problems ensued in the studio, the band was plagued with lineup changes once again. Drummer Nacht was going through major personal issues and mental illness (soon after was admitted to mental hospital). Nacht was now out of the band for good. This left Veneficum with no time to find a replacement so G.Reymond stepped in to perform the drums with no recent rehearsal and only three nights in the studio. About four to five months into the year the band had completed the entire recording and at this time a title of Enigma Prognosis was given to the new 70+ minute opus, with Niklas Sundin of Dark Tranquillity fame providing the brilliant artwork and layout. Mastering of the final mix was handled by Mika Jussila at Finnvox Studios in Finland and the CD was released internationally to critical acclaim in February 2004.

Since the release of Enigma Prognosis, many shows followed in support. It was now 2005 and for personal reasons Aric and Chris H. were unable to continue as members. Former band co-founder Mendoz and Maselbas then quickly stepped in to fill the vacant guitar spots. Work on a new album is in the process while a tour with California's Sothis, dubbed "The Texas Invasion" took place at the end of May 2006 with G.Reymond on drums and session live members on vocals and bass.

At the completion of the tour, the band went on a break to focus on songwriting and pre-production for the next CD. This time period , from late 2006 until mid 2009, was fully dedicated to what would become the third release for us and no shows were played. Tracking for the album began February 2008 once again in Studio Black Aura and continued all the way until 2010. Drums were recorded October of 2008 at Studio One in Racine, Wisconsin with Chris Djcurcic (Jungle Rot, November's Doom). In 2009, former live vocalist Andras joined the band during production and tracked the majority of lead vocals for the next album. Once the tracking was completed the band began rehearsing again in 2009 and several shows were played (with session bassist) in preparation for the impending release. At the end of 2009, G. Reymond made an abrupt departure from the lineup due to personal reasons. The band was undeterred and played two scheduled shows towards the end of the year with pre-recorded drum tracks.

2010 was a big year for Veneficum. In February, live member Void joined to replace G. Reymond on drums and Evigfrost joined on bass guitar. WIth the lineup completed the band played a handful of shows to solidify their performance as a unit. In late 2010, the third album, "In Tranquil Absurd", was finally released independently by the band. All production elements were handled by Nix in Studio Black Aura and cover artwork was done by Matt Lombard (Cradle Of Filth, Sarah Jezebel Deva).

The band is already planning an EP with new tracks, remixes, and a few re-recordings of old material to be released early 2011. Keep your eyes and ears open for Veneficum will continue to branch out into uncharted territories and perfect their craft to create the most sinister and darkest music.