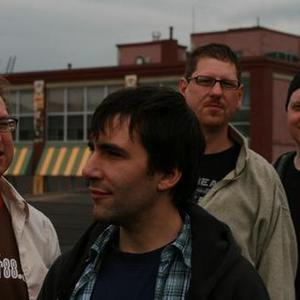 Indie, Rochester, The Best Of Local In The Roc

Veluxe is an indie band from in 2001 in Rochester, NY, USA with members Darren DeWispelaere (vocals, guitar), Adam Porter (guitar) Carl German (bass) Steve Daniels (drums). www.veluxe.net ?'What's Keeping You' is just the right amount of everything that makes the band what it is; loose melodic structure, ample dynamics, a dash of dream, and an underlying, seething intensity.? - Frank DeBlase, City News-Weekly, Rochester, NY

?'What's Keeping You' is just the right amount of everything that makes the band what it is; loose melodic structure, ample dynamics, a dash of dream, and an underlying, seething intensity.? - Frank DeBlase, City News-Weekly, Rochester, NY

?If melodic indie rock is more your thing, then Veluxe is the band for you! The energetic four-piece has put together a commendable effort that brings to mind alternative heroes like Elvis Costello, Goo Goo Dolls (the early stuff), Lemonheads and Joe Jackson. Veluxe write some catchy and quite memorable tunes.? - Michelle Picardo, Freetime Magazine, Rochester, NY.

Article in City by Frank DeBlase.

Veluxe deluxe
Veluxe rocks deluxe with a solid indie sound in a town where there ain't a whole lottaindie. The few groups that do occupy this shelf --- Hinkley, Tiger Cried Beef, Gaylord, Atumdivers, for example --- do so relatively alone. This is a city where a solid band in this vein can truly stand out. And Veluxe does.

That said, we could stand to hear a lot more from this quartet. In its five year history the band hasn't played out a whole helluva lot. So Veluxe certainly hasn't hit its saturation point, nohow. A cool three-song EP surfaced a few years back, some shows here and there in the meantime, but that's about it.

So what's been keeping Veluxe? "It's really been a process," says bassist Adam Porter. We've had three attempts at a full-length and this is the first one to come to fruition."

It wasn't a question of material or talent.

Call it self-doubt. Call it perfectionist paranoia. Call it redirection. Regardless, nobody was gonna hear it until the band was happy with it first.

"It was like we were trying too hard," says guitarist/vocalist Darren De Wispelaere. "It was too mathy. It was almost too quirky sometimes, too thought out."

So the band wrote new songs.

"It was a conscious decision this time," says drummer Steve Daniels. "'OK, let's not put all those drop-beat measures in this song; it doesn't really need it. Let's not put this extended instrumental section in this song, it defuses the song, it spreads it out too much.'"

It worked. What's Keeping You is just the right amount of everything that makes the band what it is; loose melodic structure, ample dynamics, a dash of dream, and an underlying, seething intensity.

It's as if Veluxe was poised for this album from the beginning, when it came together in March of 2001. Daniels and De Wispelaere were in Cure tribute band Disintegration but wanted to go original. They added Porter and hit the scene as a three piece.

There were obvious kings of the indie mountain that turned this band on, but Veluxe's intention was to capture the spirit and sound on its own terms.

"We didn't have any specific aspirations," De Wispelaere says. "But yeah, we definitely wanted to be a more indie-rock, alternative rock band."

Part of what makes Veluxeindie, and the new album so interesting, is the fleeting flirtations with the unconventional and a willingness to explore with nothing for a guide. The indie shoe fits but this ain't just another Guided By Dinosaur Pixie band. And as opposed to others in the genre, the quest for an exclusive sound doesn't get ridiculous. Veluxe hovers nicely.

De Wispelaere's singing is rather understated, and his guitar playing heads for the sky, but never really busts clouds. This kind of dynamic discipline doesn't come off as restraint or as some form of self-control; it's really just idie-rock's standard issue cool. For the most part Veluxe swings and rolls mid-tempo, giving What's Keeping You a pleasant sort of pulse throughout; the calm before a storm that never really comes.

So Veluxe is able to rein in the urge for volume and excess for the most part. But studio temptation had the band adding more colors than they typically painted with on stage. Like a kid with the big box of crayons, if there's extra stuff there, it's gonna get used.

"In the recording process you come up with other ideas and start layering," De Wispelaere says. "And a three-piece is great but it just sometimes falls short."

With the album's release the band promises to spend more time on stage and on the road. Now that there's something to leave behind; something to prove they were there. A new CD. More shows. What's keeping you?