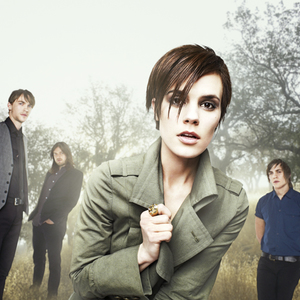 On their major-label debut album Stages, Vedera have at last been able to capture the magic that has made them such a hot live property over the past few years. The Kansas City, Missouri-based quartet, fronted by Kristen May, have toured incessantly since releasing their first EP in 2004, honing their sound and building their considerable fanbase the grassroots way ? one fan at a time. ?We've spent more time playing live than we probably ever will be able to spend in a studio,? guitarist Brian Little (and May's husband) says, ?and we think that's great.

Feeding off a live audience has really shaped what we do and we wanted Stages to reflect that.?

Those who have seen them live are already familiar with Vedera's sound: dreamy pop melodies, shimmering rock guitar, driving rhythm section, and the band's not-so-secret weapon: May's soaring vocals. Her glass-cut voice can swoop from a delicate hush to an open-throated keen on a dime as her passionate delivery provides the emotional uplift required of her lyrics, which address such themes as loss (?Loving Ghosts?), devotion (?Even I?), betrayal (?Forgive You?), romantic love (?Back to the Middle?) and wondering if love is really all you need (?Satisfy?).

?I'm always watching the way people relate to one another and how we can affect each other so much by our actions and the way we handle situations,? May says. ?I understand why people assume our songs are all about my personal relationships, but they're really about what it means to love someone and what you give up to be with the people you love, whether it's a partner, a friend, a family member, or even God. I want the themes of the songs to be relatable to everyone because music has been therapy for me for so long. I listen to a song and it can mean one thing to me one day and summon a completely different emotion the next.?

May grew up in the Kansas City suburb of Blue Springs, as did the rest of her bandmates. Her entire family was musical; her mother was a singer who loved Joni Mitchell, Carole King, and Jim Croce. ?I listened to those artists, as well as my older brother's rock records,? she says. He loved Stone Temple Pilots, Soundgarden, and Nirvana, so that rubbed off on me. Otherwise maybe I'd have holed up in my room and become a folk artist!? When May was 17, her father, a drummer, gave her a guitar and she began writing her own songs. ?It felt really good for me to express myself in that way,? she says. ?That's when I began wanting to be in a band.?

Meanwhile, Little's father gave his son his first guitar at age 13 and Little played in bands throughout high school. ?I played trumpet as a kid and performed in competitions,? he recalls. ?It was so nerve-wracking to have to memorize six pages of a classical movement and perform it perfectly onstage, alone. So to play with a band was exhilarating for me.? Little loved classic guitarists like Jimi Hendrix, Jimmy Page, and Lindsey Buckingham, whom he cites as someone who ?knows how to add melody to a song, but not take away from what the singer is trying to say.?

May and Little knew each other in high school and began playing in a band together after May returned home following an aborted stint at college in Nashville. ?I didn't want to study music anymore, I just wanted to play it,? she says. In 2003, the band she had formed with her brothers needed a guitarist and they called Little. ?He and I clicked and our worlds collided in the greatest way,? she says. With her brothers unable to travel and pursue the career musician life that May and Little craved, they asked Little's high-school friend Jason Douglas to join and also recruited Brian's younger brother Drew to play drums. Everything clicked and the quartet headed into the studio to record six songs that would become their 2004 EP This Broken City. Around that time, they hooked up with Thrice and hit the road for nine months. In 2005, they released their first full-length album, The Weight of an Empty Room and hit the road again, landing tours with Mute Math, Eisley, and Jason Mraz among others. (Vedera hit the road with The Fray, Plain White T's and All-American Rejects in 2009.)

Now comes Stages, which May describes as about ?our blood, sweat, and tears over the past five years as a band on the road. It's about our relationships to one another and the changes we've gone through.? Vedera recorded Stages with Epic Records A&R executive Mike Flynn, who co-produced the Fray's double-platinum album How to Save A Life and Augustana's 2008 album Can't Love, Can't Hurt, and engineer Warren Huart (The Fray, Augustana, Howie Day). ?Mike is like our George Martin,? Little says. ?He has a great sense of melody,? May adds. ?As a vocalist and a songwriter, I've really benefited from working with him because of his great sense of a song.?

The songs begin with May and Little (?we live together so we're constantly writing,? May says), then the pair bring their ideas to Jason and Drew who ?take it to the next level,? May says. ?That's the great thing about being in a band. Brian and I could have been a couple of folk songwriters, but Jason and Drew really make us who we are as a band.?

The core relationships that these four people have with one another is at the heart of Vedera. ?We're a family and we're very devoted to this life and to our music,? May says. ?We try to be as honest as we can and put everything we have out there with as much conviction as possible.?