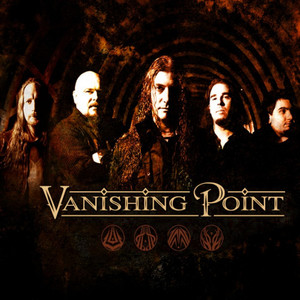 The band formed in the early 1990?s with the line up of guitarist Tommy Vucur, drummer Jack Lukic and bassist Joe Del Mastro, from an earlier band called Eye. Vocalist Silvio Massaro and keyboard player Pep Sammartino joined the band in the mid 90?s and the band changed its name to Vanishing Point. Soon after Andrew Whitehead joined as a second guitarist. The band concentrated their efforts on songwriting and recording and their first album, and In Thought was recorded in 1996, and released in Europe by German label Angular Records in 1997. The following year it was re-issued in Australia by Melbourne label Metal Warriors. The re-issue featured a bonus track, Inner Peace, which featured new Guitarist Chris Porcianko, who replaced Andrew Whitehead.

In 1999, the band supported Yngwie Malmsteen before Pep Sammartino amicably left the band to pursue other avenues. He was replaced by Danny Olding. Soon afterward, Vanishing Point headed to Germany for the 2000 Wacken Open Air festival. Later that year the band's second album Tangled in Dream was released in Australia by Metal Warriors and internationally by Germany's LMP label. The following eighteen months was a busy period for the band. In late 2001, Vanishing Point returned to Europe for a tour with Gamma Ray and Sonata Arctica, during which Olding provided live keyboards for Gamma Ray. Returning to Australia in 2002, they toured the country with German band Edguy. Olding resigned from Vanishing Point shortly after the tour was completed.

Vanishing Point worked on their next album throughout 2003 before making a rare live appearance at the annual and prestigious (now defunct) Metal For The Brain festival in Canberra. Leonard Kopilas from Manic Opera joined the band in place of Olding as recording continued, but Vanishing Point was forced into an involuntary hiatus due to ongoing differences with Metal Warriors. This led to Vanishing Point discontinuing their management with Metal Warriors. However, in 2005 the band returned to a live performance at Metal For The Brain, and then a show with Nightwish on the Melbourne leg of their Australian tour. Embrace The Silence was released mid-year internationally by their new label, Germany's Dockyard 1 and in Australian by the Wollongong-based Riot! label. Late in the year, Joe Del Mastro announced his departure from Vanishing Point. After completing a final round of live shows with the band, he was replaced by Steve Cox from Melbourne Hard Rock band Teargas, and Thrash Metal band Black Like Vengeance.

2009 was spent writing and playing shows both locally and interstate where the band was received positively. Unfortunately the writing process had hit a dead end with some members wanting to pursue different avenues musically which therefore delayed the next album. Eventually this led to a shift in band membership.

In 2010 co-founding member Tommy Vucur left the band due to musical differences. Adrian Alimic and Jake Lowe also departed the band in 2010. In 2011 Simon Best joined the band on bass, followed by Scott Griffith on guitar and in February the recording for the fifth album began. Progress has been slower than the band anticipated with there being personal / family loss as well as Scott Griffith deciding to spend more time on his own band which was receiving interest from prospective record companies overseas.

Little is known. There is a 1995 release titled The Shaman Calls. More info here: http://www.discogs.com/artist/Vanishing+Point+%282%29

(4) Vanishing Point - Mid 1990's Electronica maybe from The US. Possibly the same as the Brazil artist.

This Vanishing Point contributed a song titled Why People Don't Eat Carpet to a compilation released in 1995, titled No Structure #1. More info: http://www.discogs.com/Various-No-Structure-1/release/1074249

Two 12" LPs were released in 2001, Maverick and then All The Glitters / Maverick. These were released by Polyester Music and Polyester Recordings, respectively. More info here: http://www.discogs.com/Vanishing-Point-All-That-Glitters-Maverick/master/378173

Distant Is The Sun

Distant Is The Sun (CDS)