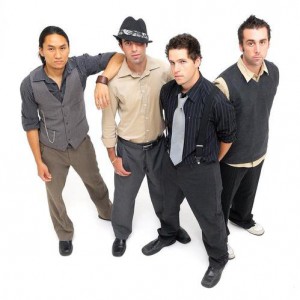 Though its members had been friends since adolescence, Toronto-based Vanderpark officially formed in 2001. Taken from the Dutch term for "from the park" -- in reference to how the guys grew up -- at the base of the band's groove-rock sound were vocal harmonies and technical, tight playing that often incorporated elements of pop, funk, rock, blues, and soul. The guys took influences from bands like moe.

the Allman Brothers, Pearl Jam, and the Dave Matthews Band, and their longtime friendship added to their comfortable on-stage chemistry. At one point a sextet that included a keyboard player, lineup changes eventually found Vanderpark comprised of David Stulberg (vocals/guitar), Marcus Wong (vocals/guitar), Dan "Booch" Buchman (percussion), Alan Demsky (bass), and Hanaya Haddad (drums). For a time, the guys were students at various universities in Ottawa, Toronto, and Montreal, which (though inconvenient to practicing) helped the group foster a broad Canadian grassroots following. The band's popularity grew as the guys toured relentlessly around central Canada and the Maritimes; they supported Little Feat on the Canadian leg of their summer 2005 tour and scored an opening spot for the Spin Doctors on their only Canadian appearance that year. Vanderpark's debut album, All Your Hands, was self-released in 2005 as well. ~ Corey Apar, All Music Guide