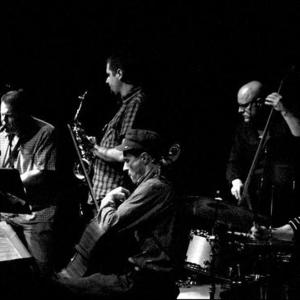 Ken Vandermark formed his quintet, the VANDERMARK 5, during the spring of 1996. Since that time it has been a major outlet for compositional and improvisational ideas that have been fascinating its leader, whose thinking has been developed through years of work with groups like the NRG Ensemble, AALY, the Peter Br?tzmann Chicago Tentet, Free Music Ensemble, School Days, Free Fall, the Territory Band, Powerhouse Sound, Frame Quartet, and the Resonance Ensemble- the members of which represent an international gallery of the cutting edge of contemporary music.

Each of the band's current members has years of performance experience working with a wide variety of music. This, coupled with the range of instrumentation and stylistic potential held by the ensemble, allows Vandermark to compose material that runs the gamut of musical possibilities- he incorporates elements of Jazz history, contemporary composition, Funk and Rock throughout the group's music. Even so, the quintet's main focus is developing methods of improvisation. Each piece is arranged to allow ample room for the members to interpret and reinterpret the writing; this creates an environment where the performers are constantly interacting and utilizing their ideas in a spontaneous way.

In the spirit of the great bands scattered throughout the history of Jazz, the Vandermark 5 has always concentrated on live performance as the means to hone its skills and develop its concepts. For many years the quintet played on a weekly basis at the Empty Bottle in Chicago. Now the ensemble has shifted their concert schedule to the road, touring in North America and Europe on a regular basis, and incorporating weekly concerts at the Elastic performance space when the members are back home.

2009 will be an auspicious year for an ensemble that has been already called ?a modern-day band for the jazz ages.? (Penguin Guide To Jazz on CD) The band has two extensive tours of Europe planned, and will record their next album in March for the Not Two record label, who has already released the critically acclaimed Alchemia Box Set and the double lp, Four Sides To The Story, by the group. In addition, the band plans its first work in North America since February 2007, plus further concerts in Chicago (including a special recording project that adds Scandinavians, H?vard Wiik on piano and Magnus Broo on trumpet). So, despite a career of more than a dozen years, this quintet clearly remains committed to the investigation of music beyond categories.