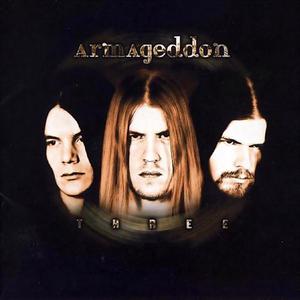 There are several bands by the name of Armageddon. 1. A hard rock band formed in 1975, comprising drummer Bobby Caldwell, previously a member of Captain Beyond, singer Keith Relf, who had fronted the enormously influential Yardbirds as well as having been a co-founder of Renaissance, guitarist Martin Pugh, of Steamhammer fame, and bassist Louis Cennamo, also formerly of Renaissance and Steamhammer. They only released one album, the self titled Armageddon.

1. A hard rock band formed in 1975, comprising drummer Bobby Caldwell, previously a member of Captain Beyond, singer Keith Relf, who had fronted the enormously influential Yardbirds as well as having been a co-founder of Renaissance, guitarist Martin Pugh, of Steamhammer fame, and bassist Louis Cennamo, also formerly of Renaissance and Steamhammer. They only released one album, the self titled Armageddon. The band only played a few gigs to promote the album which suffered the fate of being largely ignored as a result, only recently gaining something of a reputation amongst fans of hard rock. Soon after this Relf died in an accident, electrocuting himself while playing his electric guitar. (The tale that he died while playing said instrument in the bathtub is an urban legend.)

2. A metal band led by Christopher Amott, formerly of Arch Enemy and brother of AE guitarist Michael Amott. At the time of Armageddon's debut album (Crossing The Rubicon) in 1997, Amott was playing in both bands concurrently, and soon after its release he announced that he couldn't devote time to both groups, deciding to focus on AE and put this band to bed. But three years later, and two years after that, new albums appeared, curiously released in Japan only, with varying lineups surrounding Amott.

4. A Dutch hardcore producer from the 90's : Maurice Steenbergen .

5. Drum and Bass DJ/artist/producer Ray Keith also recorded under this name in the early 90s.

6. A Crust/Thrash/Hardcore band from Brasil.

7. Heavy/Power Metal band from P?cs, Hungary. They released only one album with the title "V?laszra v?rva" in 2003. After that, they disbanded.

8. A Christian glam metal band. Their bio from their MySpace page.
Armageddon began as a two man project with Robby Lee and Michael Vance in the early 1980's. Vance and Lee found each other through a newspaper ad and met for the first time 11/13/85 at a Stryper concert in Washington, D.C. The two first co-wrote a song called "The money Mask" and every song thereafter on what became known as the Second Chance demos. All of those songs were recorded on a Teac 4-track reel-to-reel in a bathroom in Falls Church, VA. The original recordings are included on the new 2007 limited edition The Money Mask CD set.

Robby Lee, who's natural instrument is the drums, played all of the guitar parts on the demos and Mark Miley (who engineered the project) played drums and bass. Vance added the vocals last.

After marketing the demos themselves, Vance and Lee were contacted by R.E.X. records, and were signed on to release "The Blazing Wasteland" on a compilation album called East Coast Metal. Shortly thereafter, Second Chance were signed by Talkingtown Records, who changed the band's name to Armageddon in 1988 prior to the release of The Money Mask. The musicians who contributed in the studio, aside from Vance, Lee and Miley, were Joe Hasslevander (drums), Danny Wilkinson (bass) and Charlie Phillips (additional guitars).

Armageddon performed many live shows on the East coast and in the mid-west. Robert Bussey joined Lee on guitar and Scott St. James handled drums with Danny Wilkinson throwing down on the bass. The band had a very animated presence on stage and packed a powerful message with a very heavy metal attacking sound.

Armageddon last performed in 2005 and is currently in the planning stages of recording some new material.

9. Armageddon is a progressive / symphonic metal band from the town of Novi Sad, Serbia. The band is led by its founder Djordje Letic, who plays guitars and keyboards. Armageddon has released the following albums so far: Eternal Mystery (1993), United Forces (1995), Savage Demons (1996), Under Symphonic Spells (1997), Heavy Metal Saga - a best of collection (2002) and Egyptian Suite (2009).